Over the last 25 years, Spolumbo’s Fine Foods & Deli has grown from three friends selling Italian sausages at a farmers market, to a multifaceted business operation.

It’s an iconic Calgary landmark that’s bound by tradition, superior quality, and a commitment to the community.  Over the last 25 years, Spolumbo’s Fine Foods & Deli has grown from three friends selling Italian sausages at a farmers market, to a multifaceted business operation.

The story of Spolumbo’s began back in 1991 when three former CFL Athletes; childhood friends Tom Spoletini, Mike Palumbo and Tony Spoletini, decided to go into business together.  Armed with traditional recipes from Tom’s mother-in-law, the three began producing spicy Italian sausages out of the kitchen of a local restaurant. 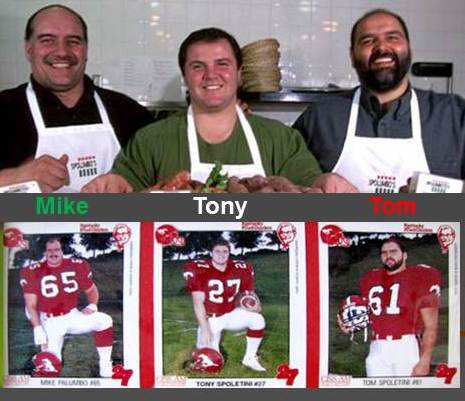 “Back then we would make sausages after hours until the sun came up, and then sell them fresh the next day,” says Tony Spoletini, co-owner and Manager of Spolumbo’s Fine Foods & Deli. “On the weekends we would go to the Millarville Farmer’s Market and sell them at an outdoor stand.”

It was at the farmers market where the three men were approached by Calgary Co-op’s Meat Director.

“He took a sample and eventually invited us to sell in the Dalhousie Co-op location for a trial period,” Tony says. “It was ideal because that’s where Tom and I grew up – the Dalhousie Co-op is where our family shopped. While working the demos in the store, we knew half the people that walked by, so the trial was a success.” 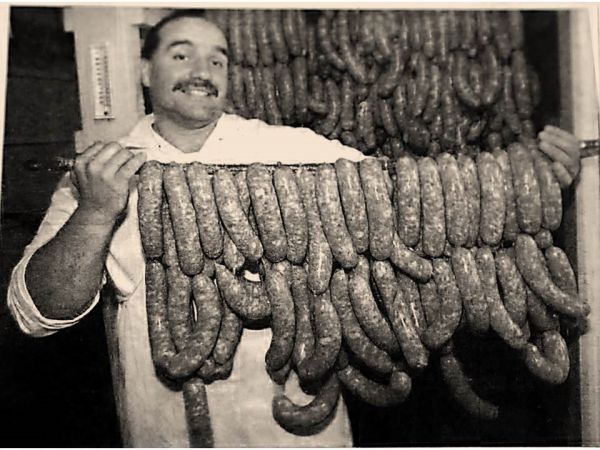 Calgary Co-op was Spolumbo’s first retailer and now sells 17 varieties of their pork and chicken sausages – more than any other retailer. In 2016, Co-op also exclusively sells the Spolumbo’s Silver Anniversary Mama’s Original Course Ground Sausage, in honour of the company’s 25th Anniversary. 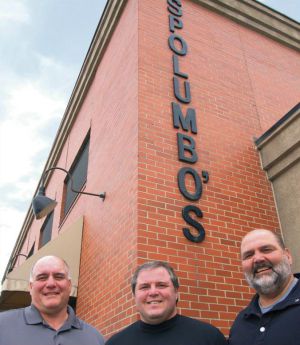 “It’s been very rewarding to partner with Calgary Co-op over the years, there’s a mutual loyalty that fits with how we do business,” Tony adds. “When local people, businesses, and organizations support each other, it creates positive ripples that expand across the community.”

The first Spolumbo’s store opened in 1992 and was a small 10-seat deli in Inglewood.  After growing out of that location, the company relocated to its current Calgary headquarters in 1998 – a 100-seat, eat-in restaurant, complete with a 5,000 square-foot sausage making facility.

“We still hand-make our sausages on-site, producing literally tons of fresh sausages every day,” he says.

Spolumbo’s Italian sausages are gluten-free and made without fillers, binders, or preservatives.  You can get them in everything from chicken-apple and turkey-cranberry to sundried tomato basil and maple breakfast.

“Our original flagship recipe is Spicy or Mild Italian; these are the most popular. It’s a Calabrian inspired recipe that comes from Southern Italy,” Tony explains. “Tom married into a Calabrese family, who are successful restaurateurs themselves, so there was some influence from there. My mother is also from that region, so these are the sausages that we grew up eating.” 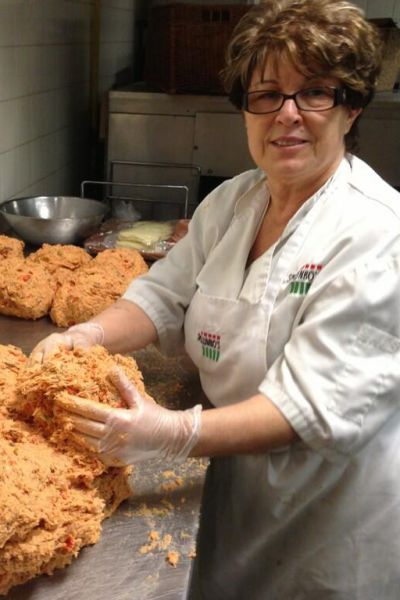 Tony’s mother, Aurora Spoletini – or “Mama” as she’s known – oversees the kitchen at the deli.  She helps with the cooking and ensures the quality and authenticity of the food is always front of mind.

“We make the cutlets every day, the meatloaf, the lasagna, the cannelloni and the tomato sauce. We also make all of the desserts” Mama says. “Every Thursday I do a pizza for the staff; this is our family business, what am I gonna do at home, just look at the TV?”

It’s that personal family touch and dedication to excellence that keeps customers lining up for lunch day after day.

“There is something in our Italian culture that values breaking bread with another person,” Tony says.  “Just knowing that our products are contributing to that experience for other people, it fosters a bond and a fondness for our customers that we couldn’t replicate in another business.”

Where does the name “Spolumbo’s” come from?

Spolumbo’s is the amalgamation of the partners’ last names; Tony and Tom SPOLetini (cousins), and fellow football teammate, friend, and co-founder, Mike PalUMBO. Tony says sometimes people come around asking about Mr. Spolumbo, as they think it’s the name of just one founder. But that’s OK with them, as it’s nice for the brand to have its own identity.

Barca is a unique, Italian delicacy from Southern Italy and is now made fresh in the Spolumbo’s kitchen and available at all Calgary Co-op Deli’s. It’s a rolled pork roulade stuffed with ham and cheese and then sprinkled heavily with herbs and spices.

What is the difference between Spolumbo’s original Spicy and Mild Italian Sausages and Mama’s Silver Anniversary Course Ground Sausages?

The recipe is not different, but the meat is ground in larger pieces and makes it taste and look different. Mama says a thicker grind is more traditional, like sausages in the old country, and are what she makes for her family at home.