More than just a prop

It’s perhaps best known for morphing into a glowing lantern at Halloween but pumpkin is so much more than a prop. Yes, that giant orange squash gets pigeonholed this time of year, but it’s so much more versatile.

Who’s jack, and why’s he got a lantern?

Why does the jack o’lantern dominate pumpkin lore? It’s because it’s a tradition that goes back hundreds of years. The Irish and the Scottish liked to hollow out turnips and potatoes, add lumps of glowing coal, and use them for lanterns as part of Celtic celebrations. When those cultures emigrated to the Americas, they discovered larger gourds that lent themselves better to being hollowed out. The name jack o’lantern comes from the root vegetable lanterns looking similar to the mysterious phenomenon of lights flickering over peat bogs, called will-o'-the-wisp or jack-o’-lantern.

Evolution of a gourd

Pumpkins weren’t always the basketball shaped behemoths we know today. The first known pumpkins were found in Mexico around 6000 BC. Native North Americans were growing and harvesting pumpkins when the pilgrims arrived, but they were much smaller and featured a longer crooked neck. In some lore, pumpkins were served at the first Thanksgivings held by the Puritans and the Wampanoag people in the 1600’s. 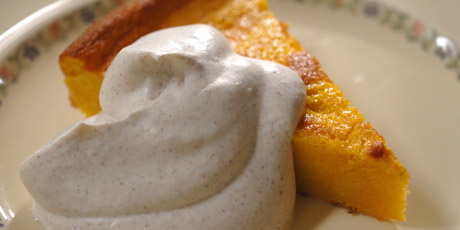 Perfect for carving and cooking

Over the years, breeding and biology has allowed the pumpkin to become what it is today; a larger, sweeter squash that’s perfect for both carving and cooking.

During the holiday season, pumpkin pie gets all the attention, but pumpkin has a variety of uses. Pumpkin can be chopped and added to stews and risottos, it can be roasted, steamed and pureed for soups, grated into breads and cakes and even made into ice cream.

Not to be cast off as waste, pumpkin seeds are also widely used and have become a popular source of protein. 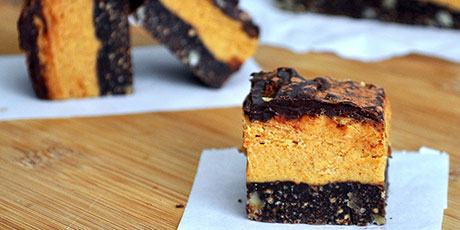 What is a pumpkin; where does the word come from? It can be traced back to the Greek peptein which means ‘to cook’. A derivative of the word, ‘pepon’ and ‘peponem’ was applied to melons, and then tweaked and applied to squashes. Over the years those words evolved to ‘pumpion’ which eventually begat ‘pumpkin’.

As a food, pumpkin is most popular when it’s most abundant; during the harvest season. While pumpkin pie is a staple, and has spawned variations like pumpkin cheesecake, there’s no denying pumpkin makes a great sweet treat.

Try shaking up the season by making Pumpkin Nanaimo Bars or this dense Pumpkin Cake with rum and orange zest. 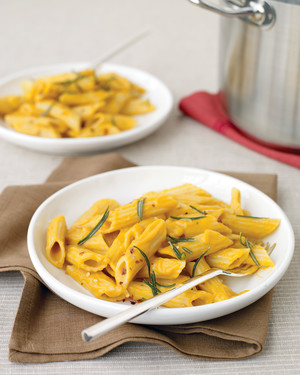 On the savoury side, a Creamy Pumpkin Herb Sauce is a surprising twist on pasta night.

Whichever way you choose to serve pumpkin, you can either peel and roast your own, or find pumpkin puree canned at Co-op for faster easier recipes.