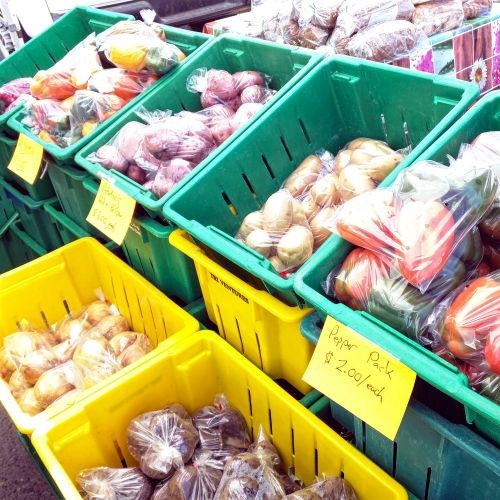 Kids love Farmer's Markets. At least, my kids do.

Kids love Farmer's Markets. At least, my kids do. So when I told them we were going to check out the Co-op's Pop-Up Market at the Crowfoot Co-op they got really excited. “Will there be samples?” they asked eagerly. I wasn't sure but I responded that there probably would be samples. They responded with a resounding cheer and then happily put on their shoes and coats and got into the car and did themselves up without fighting. (Some of that last sentence might not be true.)

Yup, these are definitely my kids, always thinking with their stomachs and learning the value of free food early on in life.

The good news is that they weren't disappointed. There were lots of samples to be had and walking around was fun.

We talked to Patricia from Miss P's Gluten Free (and had a sample of the butter tarts). We talked to Tracey from CheeCha Puffs (and my kids tried more than the socially polite amount of samples that were laid out but Tracey was a really great sport about it). We talked to Rick aka The Cucumber Man and snacked on delicious cucumbers and grape tomatoes.

The best part is that because we were paying cash we got some great deals and I had enough ready-made stuff for dinner: soup from Simple Simon, guacamole and bread from The Bread Lady and lots of great snacking tomatoes from The Cucumber Man. Dinner was quick when we got home. Plus we popped into the store to take advantage of the First to Fresh Cherry Event that is going on and pick up some milk and tea and other necessities.

Of course, when we first got there what my kids really wanted to try was the Calgary Mini Donuts food truck. Thankfully they didn't notice the Fiasco Gelato truck was also there or things might have gotten ugly.

We will definitely be going to the next one. We have so many more vendors (and samples) to try.