'Tis the season for preserving—in late summer, when so much fresh produce is at its peak, it’s easy to pick up more than you’ll use. Though preserving was once a necessity to keep a family in produce throughout the winter, it’s now done more for pleasure, and to minimize food waste. Mixing up a batch of jam or pickles need not be a day-long ordeal, nor will you require a giant pot or dozens of jars. Mixing up a quick batch of jam out of squishy fruit, or pickling excess carrots, beans or beets can extend their life, and keep them from winding up in the compost bin. 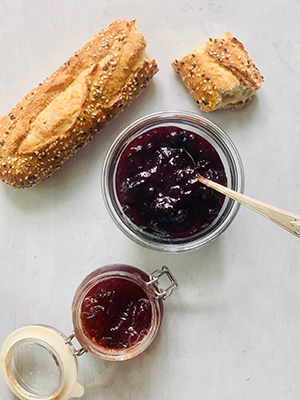 Making jam is simpler than it sounds – a combination of fruit, sugar and acid (usually lemon juice, unless the fruit is acidic enough), commercial pectin is often added to ensure a firm gel, but isn’t necessary. Neither is a pot—using a skillet instead of a pot will give you more surface area, which means your fruit will reduce more quickly, and you’ll more easily see it cook down to a jam-like consistency. Start with juicy stone fruits like peaches, apricots, cherries or plums, sliced directly into the pan with about half as much sugar as fruit and as the mixture cooks, mash it in the pan with a potato masher, spoon or fork, stirring and simmering until it thickens and looks like jam.

Similarly, quick refrigerator pickles are essentially marinated veggies, and can be made quickly as they don’t require a long fermentation time, like traditional pickles. You can use small quantities of any number of veggies, and experiment with different vinegars and added flavours like garlic, herbs and chilies.

You really don’t need measurements here—aim for about half as much sugar as you have fruit, less if your fruit is sweet or you like things on the tart side. Feel free to combine different summer fruit—all berries and stone fruits pair well together, and you could add a splash of vanilla to strawberries or cherries, grated fresh ginger to peaches, or a cinnamon stick to plums.

2 cups raspberries, blackberries, blueberries and/or strawberries (hulled and halved if necessary)
1/2-1 cup sugar, or to taste
juice of half a lemon (about 1 Tbsp)

Combine all the ingredients in a large skillet and cook over medium-high heat, stirring often and breaking up large chunks with your spoon or potato masher, until the mixture thickens and your spoon leaves a trail across the bottom of the pan. It should take about 10 minutes.

Cool completely and store in a jar in the fridge for up to 3 weeks, or freeze for longer storage. Makes about 1 1/2 cups. 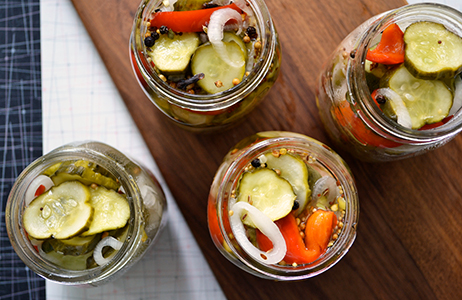 If you’re pickling green beans or asparagus, blanch them in boiling water for a minute or two, then plunge into cold water to stop them from cooking, and drain them well. Slice or cut other vegetables into sticks and pack into a clean jar. Tuck in a bit of sliced onion and/or a garlic clove per jar, or a few sprigs of dill, or a spoonful of pickling spice.

To make the brine, bring equal parts vinegar and water to a simmer, with about a tablespoon each of sugar (if using) and salt per cup of liquid. Pour the hot brine over the veggies to cover, seal and refrigerate for at least a couple days before eating. Store in the fridge for up to 3 months.