“We’re on a mission to let people know you should love your armpits!” laughs Neige. “For so many years we’ve been conditioned to think of armpits as stinky and sinful, but they’re just another part of your body to love.”

The Blairs, sisters-in-law, are the founding partners of Routine, a natural skincare line founded and based here in Calgary. Their flagship product has become a natural deodorant with a now-cult following. Routine Natural Deodorant has been available to Calgary Co-op shoppers for about two years, but the company has been around for close to a decade and also makes face oils. 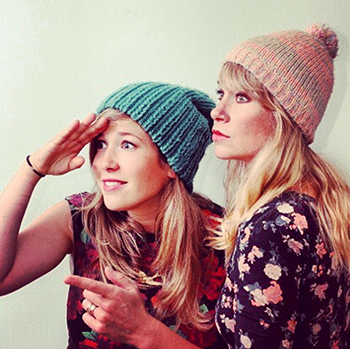 “It all started when I was looking for a better and more natural alternative to deodorant and antiperspirant,” recalls Neige. “I’d always been making my own natural products and I put together the best ingredients. With the deodorant, I looked for ingredients that were anti-bacterial and also good for your skin, and I used essential oils for scent.”

Routine is a cream-based deodorant that’s applied with the fingers to combat the bacteria that typically makes underarms smell… funky. All the ingredients in Routine’s deodorant are plant-based (with the exception of beeswax) and include essential oils and natural clays for absorption.

Traditional mass-market antiperspirants or deodorants work by blocking pores to prevent sweating. With Routine, you may still sweat, but the odour is eliminated naturally.

“All the ingredients are designed to combat that bacteria that causes odour,” Neige explains. “As you stop using conventional deodorant or antiperspirant, which are filled with all kinds of chemicals and metals such as aluminum chlorohydrate, your body actually starts to sweat less, because it’s not having to work so hard to try to sweat through those typical deodorants.”

Neige says she’d actually formulated Routine’s deodorant years earlier and had been using it herself constantly, but she never thought anyone else would be as interested as her in this natural alternative. Once she started to share that early product with friends and family, they were overwhelming in their response.

“They said this deodorant was changing their lives and I should go into business. At the time I wasn’t that inclined to do it, because, well, I wasn’t really planning on getting into the deodorant-making business.” 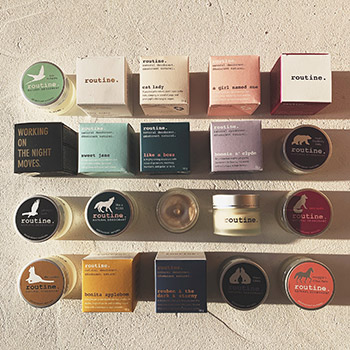 Neige decided to start small, selling her wares at a local market in Calgary. Her husband’s brother’s girlfriend, Pippa, was enlisted to help. After seeing good success from that first sales push, including offers from retailers to carry the products, the duo decided to team up and Routine was born as a business.

Routine Natural Deodorant is made in nearly 20 different scent profiles from floral, to light and tropical, to musky and masculine. A 58 gram-sized jar is enough for up to six months of use, according to the Blairs.

“The effectiveness is unparalleled,” enthuses Pippa. “There was definitely a gap in the market for a natural alternative that actually works. We were one of the first natural cream deodorants on the market in Canada.”

Since those early days, the sisters-in-law have worked to perfect the formulations, expanded the line and developed a loyal customer following.

“We aren’t as ‘hippy-ish’ as you might think,” Neige laughs again. “This is a product for everyone. We want it to be approachable, and cool and hip; kind of like finding a really cool band that no one knows about yet!”