To Visit Some of Alberta's Quirky Roadside Attractions

We all know Alberta’s reputation as one of the most beautiful places in the world with its badlands, prairies, glaciers, mountains, lakes, and vast forestland. If you’re not in the position to travel abroad or even to a different province, a quirky drive is a great way to get out and see some sights in the comfort and safety of your car, without having to or go far away. Driving trips are fun and normally much less stressful than an itinerary-packed trip because you can go at your own pace. This includes stopping to eat or get snacks, picking exactly what you want to see, and getting out of the car at any time to explore any destination. Why not make Calgary Co-op your first stop for some road trip snacks and essentials, then fuel up and hit the road?

After living in Alberta we’ve probably all driven past unusual destinations and roadside attractions and wondered what’s up with them. Now’s the perfect time to plan a day trip to find out! Check out our list of oddest curiosities in Alberta. 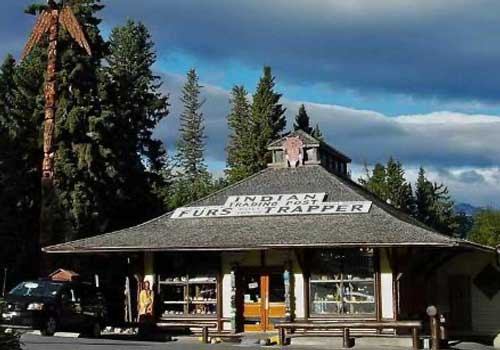 Banff Merman
Have you heard about the store that houses the Banff Merman? Located in the Indian Trading Company store, this mysterious icon is located at 101 Cave Avenue in Banff. The Banff Merman is a terrifying creature locked up in a glass case at the back of this unique shop: it appears to be a creature frozen in time that’s half man, half fish or mermaid.

Nobody is quite sure of the origin of the Banff Merman, sometimes cutely nicknamed Herman the Merman. The mummified-looking creature features deep set eyes that are kind of scary as well as teeth that could compete with a shark’s plus a set of touseled hair. The legend is that a merman just like this one emerged from Lake Minnewanka one fine day in the early 1800s and forcefully pushed water up towards a campsite. The sole witness, a fisherman, also reportedly heard drumming and voices emerging before the merman disappeared again.

The store’s founder, Norman Luxton, put Herman the Merman on display in 1915 with the tag “one fish-man” and it has remained on display since then. Although the story is fun, there is a lot of speculation that none of it actually happened and Luxton simply got the merman (a rubber sculpture?) from an artist overseas.

While most people believe mermen have never existed and never will, some of us are still believers! 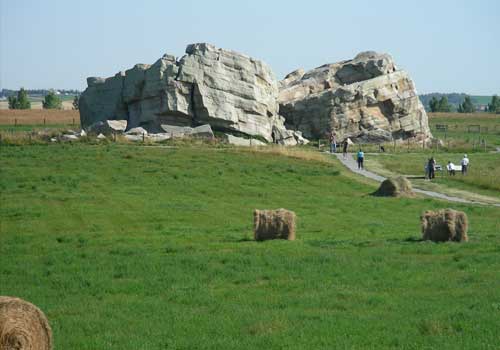 Big Rock
Okotoks Erratic, also known as “Big Rock,” is an unmissable stop on any Calgary-area driving trip. If you’ve never been and have wondered how a rock could possibly be THAT exciting, the answer is: science, geology and ancient glacial movement.

This enormous, glacial erratic (which essentially translates to an oddity dropped off by a glacier) weighs in at 16,500 tonnes and is presumed to have shifted from its original mountainous spot by a rockslide that occurred between 10,000 and 30,000 years ago, and then been carried south and east as glaciers advanced across Alberta during an ice age.

The rock itself is more intriguing than anyone would ever expect. It is made of typical quartzite but seems to change colors in the sun from light grey to a pinkish/purplish colour. This is helped by the fact that it is such a random landmark amid vast openness of our prairie, so the changing weather and conditions seem to make the colour changes even more noticeable.

Not only is the Big Rock a stunning place to be, you may also want to venture over to the Little Rock which is only a short distance away on the other side of the highway but has basically the same story. 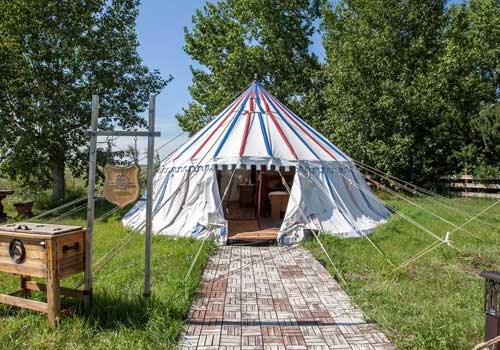 Good Knights Medieval Encampment
Just 10 km south of Three Hills, Good Knights Medieval Encampment is a lesser known but fascinating outing or overnight stay when the weather warms. The encampment provides breakfasts and a Saturday night “feast” and also has kitchen facilities for guests to use the rest of their stays. The provided tents are waterproof and roomy with wooden floors covered by thick rugs, and each tent has a cleverly-named “throne-room” with a toilet and a sink.

A slew of activities is available, including everything from book reading to archery.

World’s Largest Perogy
Basically, a roadside icon in honour of European cuisine, the Giant Perogy in Glendon is a must-see on a driving trip through Alberta.

Weighing in at a whopping 6,000 pounds, the 27-foot high perogy statue has a massive fork poking through it, however the original design was created without a fork but caused confusion to spectators who had no idea what it was supposed to be.

While the now-defunct Perogy Cafe next door has closed down, you’ll sometimes see a food truck serving deep fried perogies. Although the massive Perogy is cool, the area is also great for kids because it is located in a big field with a recently-built playground that includes a rocking airplane. If you’re getting antsy on a car ride, this is a great place to get out and spend some time. 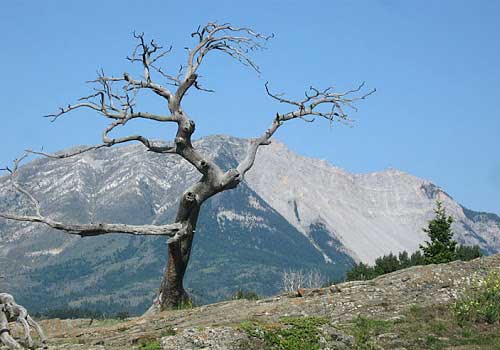 Burmis Tree
The Burmis tree may be a gnarled old tree but the story behind it has made it an Alberta landmark.

Burmis was initially a mining town for the Davenport Coal Company and blossomed into a small town with a school and shops. Like other mining towns, jobs and wealth went on a downslide when the mining industry fell out of favour and it was recreated as a lumber town for a while until that got phased out, too.

Almost every single tree in town was cleared around that time, but The Burmis Tree withstood all of the changes before dying in the late 1970s. What makes the Burmis Tree so exceptional to Alberta is that the local residents still care for the dead tree to this day, even re-uprighting it after it was knocked over by fierce weather in 1998. Residents even glued back a branch that had been cut off by some vandals a few years later.

While it may sound like “just a tree,” the history and preservation make it worth a stop on any driving trip through Alberta. Pro tip: try to go view (or show off) the tree sometime in the morning then stop in the nearby Harvest Coffeehouse for undoubtedly the best coffee and tea in the area plus a sandwich (or two—take one for the road!). 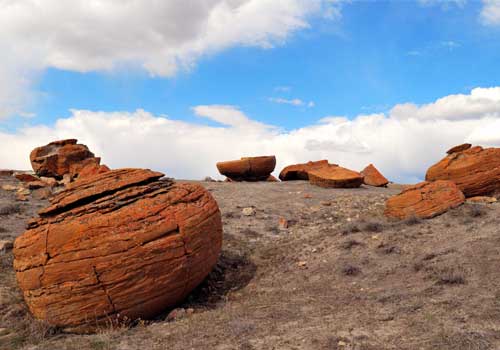 If you’re traveling near the Medicine Hat area, you must stop and explore for at least an hour or two. As the name suggests, the red rocks are probably the coolest part of this and are another one of the awe-inspiring creations of Mother Nature. Some feel they look like some sort of alien rocks from the dinosaur age or perhaps another planet such as Mars or Jupiter. The sky gives off a unique, serene vibe on certain days when the weather is just right and an added bonus is the wildlife you may spot on lucky days.

There are no tables, benches, or restrooms, but a short hike around to see the landscape should be a priority if you are driving through Alberta.

Torrington Gopher Museum
Last but certainly not least on our list of must-dos during a driving trip through Alberta is the Gopher Museum at 208 1 Street South in Torrington. The museum is open from June 1st to September 30th. Though the museum is very small and normally only takes about 20 minutes or so to get through, it’s chock full of… dead gophers, all stuffed by professional taxidermists, and posed just-so in splendid little dioramas, which are amazing in that they are so detailed and even a non-art-buff can appreciate the effort put in to create them. This museum is good for a laugh, and to share out on your social media feeds, since your pals elsewhere won’t believe what you’re seeing.

This weekend, plan a driving trip through Alberta if you are needing a staycation without actually staying home. There are so many sights to see throughout the beautiful province, and there is never a shortage of things for you and your family and friends to do. 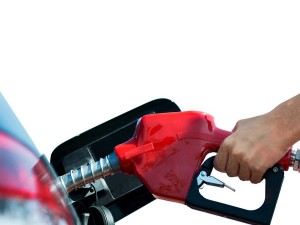 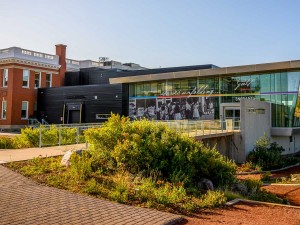 Most people forget all about their own backyards when planning vacations and getaways. 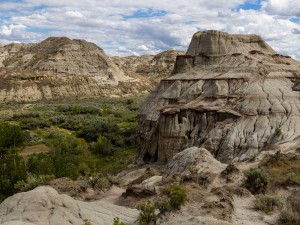 While dinosaurs may not roam the earth today, they are still the subject of many movies, shows, and books, and a whole lot of curiousity.