Patch is an alternative to traditional plastic bandages.

We've all had a cut and probably slapped a bandage on it without much of a thought. But some folks react badly to these little medical marvels; whether that's an allergy to latex, or a reaction to some types of adhesives, or simply a contact reaction to having something placed over the skin for prolonged periods. That's what spurred James Dutton to start seeking alternatives. 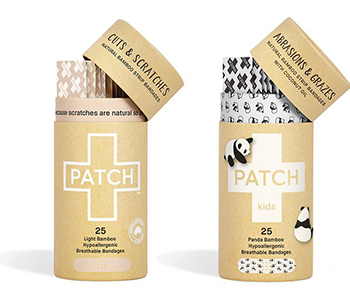 "My son, Charlie reacted to traditional bandages when he was just a toddler–and knowing that there were no other options on the market for him and for so many people around the world, gave me huge momentum," recalls Dutton. "I was familiar with bamboo as a material to work with, so PATCH as a concept was developed in just a few months."

Patch is an alternative to traditional plastic bandages. Made with 100% organic bamboo fibre with activated charcoal, aloe vera and coconut oil, PATCH is meant to be a more natural and environmentally friendly alternative to typical adhesive bandages. While they look just like a typical bandage on the inside, on the outside, PATCH uses fun and bold designs and prints, alongside more traditional options.

"We use flexible, breathable, certified organic bamboo for the strip material," Dutton explains. "Not only is bamboo an incredibly efficient and hardy material to work with, it’s also one of the most sustainable – which makes it a bit of a no-brainer! For the gauze, we’ve developed a Pressure Sensitive Adhesive (PSA) which means it’s latex, paraben and thimerosal free.

PATCH bandages are infused with what the company says are natural elements, designed not to sting sensitive skin.

"My older son, Xavier, like most kids, used to run away any time I tried to apply any antiseptics to his skin. So, whilst developing PATCH I thought, why not just infuse in the gauze? We have coconut oil, aloe vera and charcoal as different options which all have their different strengths and applications. The activated charcoal has been an absolute game-changer for drawing out stings and insect bites, and the aloe vera a life saver for those annoying blisters." 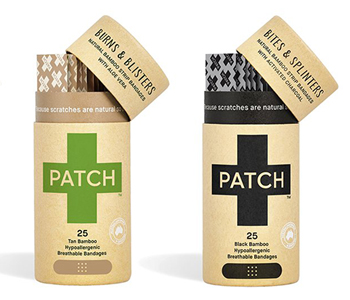 Dutton also shares that his company is conscious of the global battle over plastics, single-use items and overall waste.

"Consider this: there are 1.2 billion households in the world. Based on the average global consumption of bandages, this results in 2.5 billion linear metres of material waste produced – which would wrap around the world 51 times every year! It’s about making people aware of the small change they can make in their lives to combat plastic waste – and especially knowing that they don’t have to sacrifice on quality or effectiveness."

Dutton began developing PATCH in his home and tested them out initially on family and friends until he had a prototype he was happy with. Then he decided to get his creation out to a wider audience, spending a week in a shopping centre, handing people the product and asking them what their impressions were, good and bad. He was pleased when people starting responding positively.

"PATCH is reported globally as the only wound care option that people with sensitive skin can use. It's of course made even better with the added benefit of activated charcoal, coconut oil and aloe vera enriched gauze," Dutton says about what makes his product unique. "PATCH is good for you; we say no to irritants that common bandages may have: no plastic, no latex, no parabens. And they're made with a non-stick gauze that's easy to remove. Plus, they're compostable."

Bandages are a Class 1 medical device, so there are strict rules and regulations around their production. PATCH is fully approved by all global regulatory bodies, including those in Canada.

"But at the end of the day, the comfort and flexibility of the product was a massive factor in the design and it was important that we made something people wanted to have on their skin." We all know that feeling of anxiety we get when we’re about to host guests for holiday gatherings; you want the house to look good... With the influx of collagen supplements on the market I find myself in conversation almost daily discussing what all the hype is about.