About an hour outside of Calgary to the south is a little place that is the paradise of tomatoes in Alberta.

About an hour outside of Calgary to the south is a little place that is the paradise of tomatoes in Alberta. Appropriately enough it is called Paradise Hill Farms and is home to the Legualt family.

When you stand in the office of the Paradise Hill Farms one thing you will notice is the retro display case housing all kinds of tomato paraphernalia like a teapot shaped like a tomato, and ceramic tomatoes with faces. If you look through the window of the office into the first greenhouse you will see the tomatoes growing large and basil that looks like it is trying to reach for the sky. 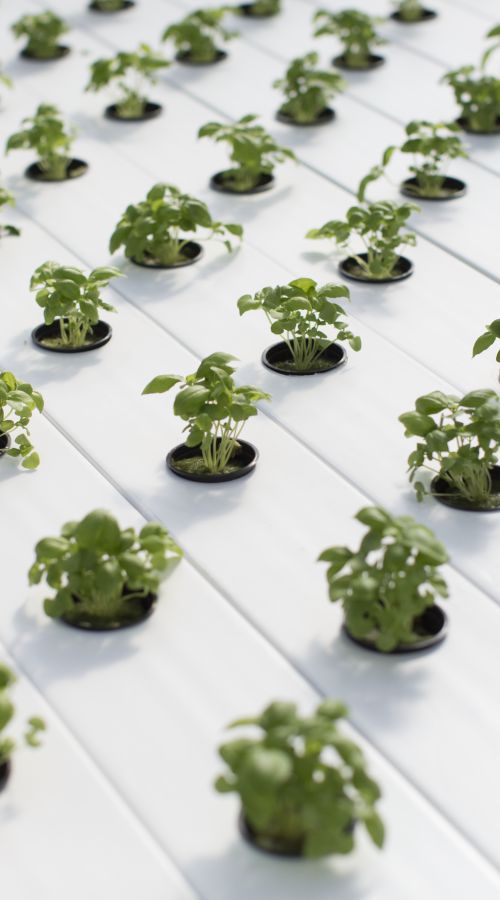 While Tony and Karen and the rest of the Legault family are known for their tomatoes their basil is becoming really popular too.

“We do four plantings of basil in here in a month – so every week we put new basil down and every week we take new basil out. Right now we are averaging about 1,500 basil plants a week out of this section,” Tony says looking out the window.

In the greenhouse, basil plants take six weeks from seed to picking.

“Mother Nature doesn't work on a schedule,” Tony says. “If it gets cloudy things slow down. If they get sun,” he says gesturing out the window at the basil plants that are falling over they are so large, “they grow like crazy.”

The result, Tony says, is that the next week at the Co-op you get a lot more basil for your money. Thankfully the basil is pliable and can fit into the packaging easily.

In September of this year it will be the 15th anniversary of Paradise Hills relationship with the Calgary Co-op – and that is exactly what they call it: a relationship. A relationship that, Tony says, started on a handshake deal.

“You have to tell her how that deal happened,” Karen injects while Tony is telling his story. “We have four kids. When we started this Shane, our oldest, was six, Chantel was four, Luke was two and Cody was born nine months after we moved.”

According to Karen, Tony told her 'Honey your life won't change I'm just going to do a little greenhouse thing here and you just keep doing your thing with the kids and it's all good.' With that in mind Karen took the kids to visit her parents by the ocean for a summer trip.

“He phones me one night and says 'I'm just going crazy I can't get it all done,'” Karen says. “He's trying to do it all himself: he's pruning, he's picking, he's boxing, he's doing everything.” So Karen cuts their trip short to go home and help.

Picture this: The Legaults as a young couple with small children. Tony is a mechanic and Karen's background is in livestock (they had about four hundred sheep this Spring). Tony really wanted to go into farming and it is the classic case of wondering if you are too set in your ways to make the leap. He was 35 years old with a young family to feed and a background in mechanics.

However, they made the leap and bought a place in Nanton that had good bones but needed a lot of work and then set out to learn about how to be greenhouse growers.

When they received their first load of tomato seedlings Karen says it was almost comical.

“The guy showed up with the load of plants for the first time here, backs the truck up and asks 'Where's your crew?' and it was three kids in pyjamas and us.” Karen says also saying that Tony was in a full leg cast at the time because of a full on collision that he was lucky to survive from. The delivery driver felt so sorry for them he stayed to help unload all the plants. However, then they had all these plants that were growing like crazy so they had to find a distributor fast.

“I had an old station wagon and I loaded it up with nursing babies and kids and boxes in the back,” says Karen. “I'm going door to door, restaurant to restaurant, grocery store to grocery store just handing out tomatoes and business cards and talking to people.”

One of those stops Karen made was to the produce manager at the Deer Valley Co-op. He tasted the tomatoes right there and told them that was what he was looking for.

“He told us this whole concept is what the Co-op was looking for,” Tony says. 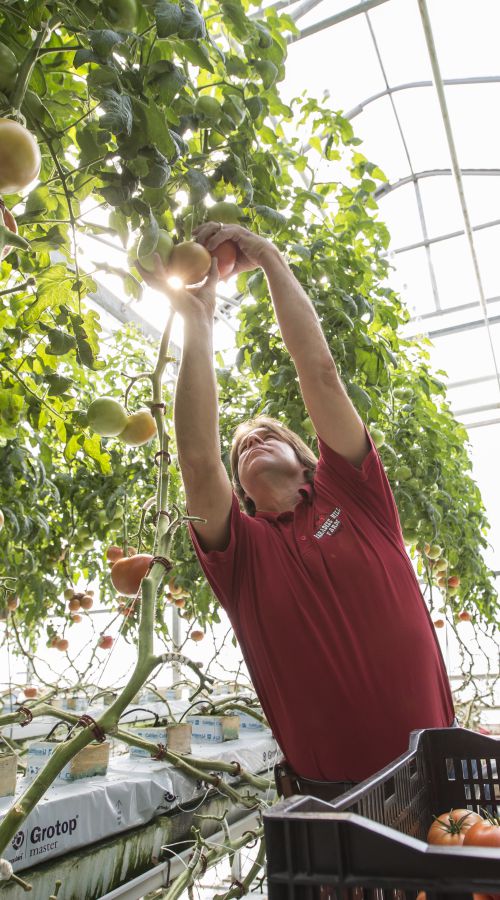 Meanwhile the tomatoes are building up.

“Our so-called produce cooler at that time was an air conditioner stuffed into a room,” Tony says laughing. “So we're holding on to the tomatoes, at that time I didn't know how to do it so I was picking a few tomatoes every day and just storing them. Basically we had about 5000lbs of tomatoes built up from three or four days and we're sitting in the office asking 'What are we going to do?'”

As another option Tony started making tomato chips in a big Bosch dehydrator. Tony jokes about telling Karen that the kids won't go hungry but each batch took 36 hours of drying time.

“After a couple days I'm realizing that this isn't going to work, we'd need 40 of these things going at once,” Tony said. The chips, which Tony said had 'super tomato power' flavour were hugely popular at the farmer's markets but what they really wanted to do was sell fresh tomatoes.

While Tony and Karen are sitting around in the office one night wondering what they are going to do with their 5000 lbs of fresh tomatoes the Produce Manager from the Co-op calls.

According to Tony the Produce Director says to them, “'I hear you got tomatoes. My manager says we should sell them because they are pretty good.'”

They were told to take their tomatoes to three Co-op stores and to deal directly with the Produce Managers there and that they would phone them back in 30 days to see how things were going.

“You've got to think that at that time the decision that produce director made for us, we only had enough tomatoes – although we thought it was a hell of a lot of tomatoes - to supply three stores,” Karen says. “That was just a drop in the bucket for them. For them to even take the time to encourage us as small, local, brand-new tomato farmers trying to get into the market – that was huge for us, it was business changing, life changing. The fact that they said 'come to three stores' because then we were able to build on that and then go go go. It was so important that they cared enough about the little guy to say yes.”

At the end of those 30 days the Produce Director called them back and asked 'you got anymore tomatoes?' The Co-op said they would take them all until the end of their growing season and then start up again the next year.

“Everybody warned us 'don't put all your eggs in one basket' that's the biggest marketing (mistake) and now we are going to stick all our tomatoes in one box do we do this?” Tony says. “Do we make this commitment? How do we know? This is a new company we are dealing with and we are a new company they are dealing with.”

“I said to Karen 'The director is good, he shook my hand, let's do this.'” Tony says.

“From that point on we basically looked at it like a relationship with the Co-op and it's been really good.” Karen says. “We've seen hard times, like when we had the grass fire that came through here in January 2012, and windstorms that have ripped the roof (off the greenhouse). The managers came out in times of need. They helped us replant – they enjoyed it so much coming out here that it is kind of an annual event now even when we are not in crisis they still want to come out and help us plant the tomatoes.”

“They plant the tomatoes and get their hands dirty and get right in there,' Tony says of the relationship they have we the Co-op managers who come out to help. “We do a nice lunch after and it's just like happy family.” While we’re all feeling a little cabin fever, why not get out and explore our backyard? A road trip in the safety and comfort of... We’ve all heard the latest craze about adding bacon to everything, but did you know that fresh sausage can be an excellent addition to your...