"98 per cent of the population eats tomatoes and there (were) really no good tomatoes out there."

When Tony and Karen Legault decided they wanted to go into the greenhouse business they weren't quite sure what they were going to grow. So the reason we now get delicious beefsteak tomatoes from Paradise Hill Farm today is because of some questions they asked themselves fifteen years ago.

“I had no grower background,” he admits, but that didn't stop him from really wanting to become a farmer. So he and Karen sat down and thought about this greenhouse they were buying in Nanton, Alberta and asked themselves what were they going to grow.

“We looked into cucumbers which was the number one crop in Alberta,” Tony says, and they looked at growing peppers.

“But it came down to sitting down and looking at the fact that 98 per cent of the population eats tomatoes and there (were) really no good tomatoes out there.”

“When we first started we went to a green house conference,” Tony says. “I was (asking an established tomato grower) about what variety to grow and how do you find varieties that have good taste.” Tony was told that it didn't matter what they grew or what the taste was. “The guy said: 'taste doesn't matter, it's a staple, it's like a potato, all you need is production.'”

That's when Tony and Karen knew they would have a market because they refused to believe people didn't care about taste.

So what makes a good tomato?

“It's basically the environment,” Tony says and asked himself: if there were all these other greenhouses out there growing tomatoes why don't they create really great tomatoes?

“Well, there are other factors – if you push production you forfeit something and what you are basically forfeiting is taste because you can't get all the production and get taste at the same time – you have to get one or the other. So we opted not to go for full out production – just get enough production where we could balance that taste and still make enough (to live).”

How did they find the right combination they needed to grow a tasty tomato? Tony says it was a fluke – or, a lot of flukes.

“I did a lot of research when we first started with a lot of stuff that was happening in Holland at the time to improve the taste of their domestic product.” Tony says an article he had translated from Dutch into English was like his growing bible for a while.

“Years later I found out that all it was, was a tiny little research plot in Holland that they were doing these tests on that was not a lot bigger than what we were doing.”

At one point Tony says he hired a plant pathologist so he could learn more about how nutrients flow into plants. He says his process of becoming a tomato farmer was mostly by fluke and fine-tuning.

All the trial-and-error work they did seems to have worked out well. People are often concerned that the bigger tomatoes don't have any taste. Tony admits that people are right when they think the bigger tomatoes are full of water. “But if you grow it differently so that the content of water in the big tomato is the same as the small one it is going to taste the same.” To test the sugar content of the fruit they use something called a Brix meter. Tony uses the brix meter on everything to get as consistent a taste as possible – but a lot has to do with the variety of the tomato and the location in the greenhouse.

“The tomato that comes right smack dab out of the middle does not taste nearly as good as the ones that come 20 feet from the end, because of the sunlight.” Tony says.

“This is why we don't put any artificial light (in the greenhouse) because it doesn't taste the same. I don't care what anybody says. I've never cut into an artificially lit tomato and found that it tastes better. We have all the technology in the world and we can think that we have everything just right but it isn't the sun. There is energy in it that we are not recreating with a lightbulb.”

Which makes sense. Plants have evolved over millions of years to harness the sun's spectrum, not an LED.

“I will admit that green things, green plants will do well under lights, like basil, and you won't taste the difference. But if you want to colour a fruit, that's where it goes missing. Even cucumber under lights it's hard to tell the difference – but with a tomato, I can't say that I can find one (that tastes good).”

In order to take advantage of the sun and provide quality tomatoes they don't run production all year. They have a December first date for shutting down production.

“We have tried going a week more and we have tried a week less but it is a loss,” Tony says. “The taste drops drastically after the first of December because of the light we get here. Maybe if I lived further south I could go another week or two but right here that seems to be the day.” 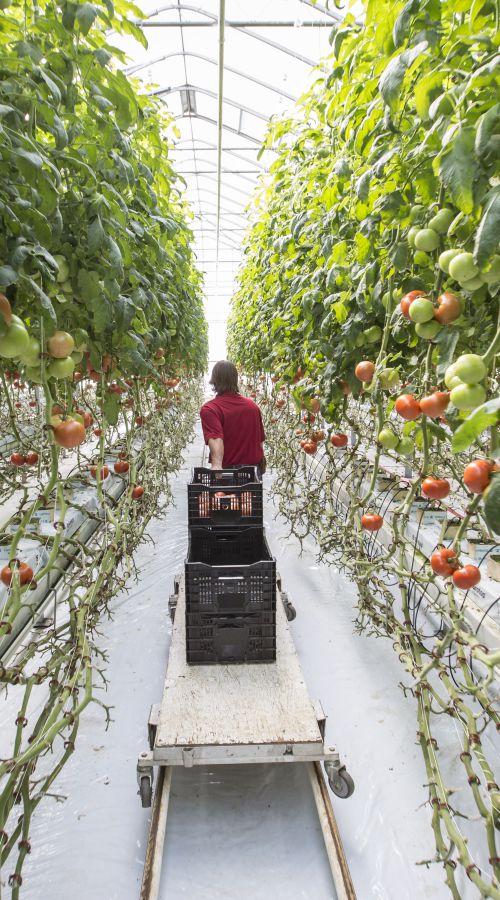 Currently their methodology seems to be working and they are sticking to it.

“The last 10 years the tomatoes have tasted fairly consistent,” he says. “We've made two changes in the type and found that if you change the type of tomato that changes the taste.”

When they changed the type of tomato they ran trials to make sure the changes were worth it.

“We sent it to every Co-op staff person that we possibly could at the stores, gave them blind taste tests of different tomatoes and they were to tell us which tasted the best. That's all I wanted to know. I didn't want to know what they looked like, what they smelled like – just what they tasted like.”

That is their goal: a really tasty tomato. They also provide a variety of sizes, surprising themselves when discovering what people wanted. When they were selling their tomatoes at the farmer's markets they would find the biggest tomatoes they had that week and put them on the shelf for display thinking no one would want a tomato that big.

“When we first started, everyone's beefsteak tomatoes all looked cookie cutter and they aren't really grown like that,” Karen says. “We have some little ones, we have some big ones. So we were one of the first that we're aware of that said: if it was a good quality tomato – no marks or pokes, we will still put it in the case and let the customer pick what they want. The lady who wants the little tomato, the guy who wants a big one: let the customer pick the tomato.” The Co-op agreed with them.

In the end though it all still comes down to taste and in order to market a really fresh tomato you have to do it locally.

“I truly believe that when you market something it makes perfect sense to market to your neighbour first, and when your neighbour can't buy everything that you are producing then you market to his neighbour and you go from there,” Tony says. “You should not go from the opposite end of whatever spectrum you're at and sell it there first and work your way back home. That is our philosophy.”

Instead, Tony and Karen believe that you should market locally first and then make your circles bigger until you run out of product. If you market far away first and try to move closer to home no one is going to get a fresh tomato. No one is going to know what a fresh tomato is truly supposed to taste like – and that was the whole point of becoming tomato growers, to create a really fresh and tasty tomato.

Back to Top
Calgary Co-op Learn Paradise Hill Farm – Part 2 “Why tomatoes?”
Back to Top