One Of The Best Known Italian Desserts

Found During The Christmas Season

There are a few things that spell out the beginning of the holiday season; Christmas decorations begin to appear, yes. But at your local Co-op, you’ll start to see holiday treats emerging, like succulent seasonal mandarin oranges and of course, the festive boxes of the classic Italian Christmas bread, Panettone.

What is Panettone?
Panettone is one of the best known Italian holiday desserts, typically only found during the Christmas season. It was said to be created in Milan using yeast, flour, milk, eggs, butter, and a variety of dried and candied fruit. That’s a traditional Panettone, but today this moist, chewy bread can be found in many different flavours.

A traditional Panettone has a cylindrical shape with a domed top. It’s known for its light and airy texture which is owed to a very specific process that includes working carefully with the dough, using only natural, wild yeast (also called "mother yeast") and letting it proof for more than a day.

Before it heads to the oven, master Italian bakers would make a cross-like cut on top, which traditionally was meant to bless the Panettone.

Once baked, Panettone is often hung upside down for few hours to cool to room temperature, and this prevents the big, tall bread from caving in on itself. 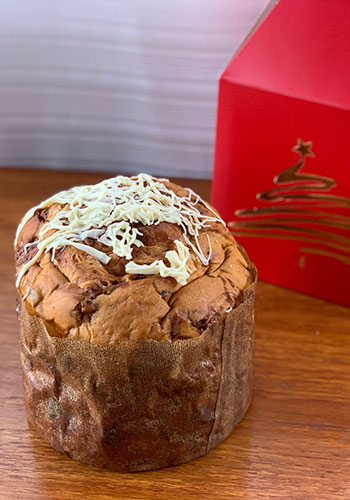 Panettone: Locally Baked By Calgary Italian Bakery
At Co-op, panettone can be found from our partners at Calgary Italian Bakery. Locally handcrafted and lovingly baked, these panettone are then boxed up in beautiful red and gold boxes, making these local delights perfect for giving as a hostess gift, or to friends and neighbours who may drop by with a gift for you. Try the White Chocolate & Cranberry Panettone (plump, juicy cranberries contrast perfectly with creamy white chocolate in this light and chewy holiday bread), or Traditional Panettone. If there's any left over, it makes divine French toast. Calgary Italian Bakery helpfully attaches a the recipe so you have everything you need.

Panettone: A Christmas Story
There are many versions of how this Italian Christmas classic came to be. One of the more popular stories goes back to the 15th century, when the Duke of Milan, Ludovico il Moro, threw a spectacular Christmas dinner for his royal court. His chef, perhaps a little too deep into the holiday brandy, burnt the dessert that was meant to be served. To save the chef from embarrassment—or something worse—a kitchen helper named Toni, jumped in and tried to make a new dessert with all that was left in the kitchen: some orange peels, raisins, sugar and butter, plus the last scraps of leftover dough from the ruined dessert. Unexpectedly, Toni’s bread had a rich yet fluffy texture and the sweet dome-shaped fruit-filled cake was a hit with the guests.

The story says that to honour him, Ludovico il Moro called the cake "Pane di Toni, meaning ‘Toni's bread’, and this eventually became known as Panettone.

Traditionally, Panettone is eaten after Christmas dinner and is served by cutting long triangle wedges, which can be eaten alone or accompanied with chocolate or cream. 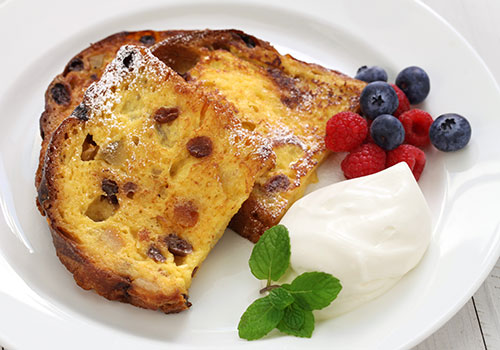 Leftover Panettone Makes Great Bread Pudding, French Toast
If there’s any left, Panettone can be used as an ingredient for different recipes and delicious desserts. It can even be added to regular bread in stuffing for a richer, slightly sweeter option.

Panettone slices make beautiful French Toast, or tear up any leftovers and use them to create a holiday Bread Pudding or an old fashioned breakfast Wifesaver.

You can even try making another Italian classic —Tiramisu, using Panettone instead of ladyfingers.

Or Keep It Traditional
And cold weekend or holiday mornings get even more cheerful with a simple slice of hot buttered Panettone toast covered with honey alongside your morning coffee or tea. If you need to buy your mom a gift for Mother’s Day but most of the nice shops and cool stores are closed, take heart:... Nothing says ‘holidays’ like the smell of fresh baking. Whether that’s banana bread, pumpkin pie or a batch of traditional sugar cookies just waiting to... Whether or not pizza Fridays are a thing at your house, fresh pizza dough can be a lifesaver when it comes to getting dinner on...

Back to Top
Calgary Co-op Learn Panettone
Back to Top