Sweet, Spicy and Tangy All At Once

We may think ketchup is 100% North American, but it turns out it’s anything but. With roots that can be traced back to Britain and further back still to Asia, ketchup is a true multicultural food. The rise of spicy-tangy Thai Sriracha sauce in recent years too has broadened many horizons when it comes to condiments.

So it’s with customers’ international and multicultural openness that Co-op will carry a brand new sauce, one with its roots in western Nigeria. 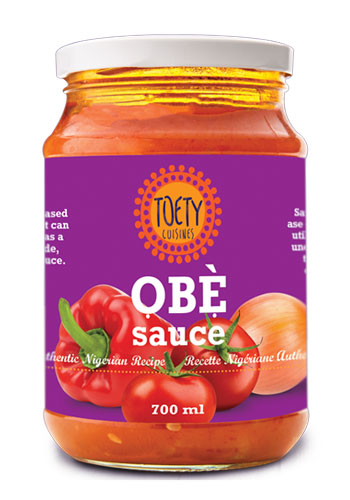 Obe Sauce is New at Co-op

Obe sauce (pronounced OH-bay) is a versatile tomato-based sauce, dip and marinade that’s popular in Africa. Made with ingredients that include onions, peppers, chilis and vegetable stock, the sauce has many uses.

“In Nigeria, it’s eaten with rice and chicken or beef. It’s put over pasta, used as a dipping sauce and it’s even used with potatoes or cassava instead of ketchup,” explains Yinka Adelodun, of Toety Cuisines, makers of Co-op’s Obe sauce.

Adelodun has taken an unlikely path to becoming a champion for the cuisine of his homeland. After spending 20 years in the oil and gas business, he wanted a change, and to work with more sustainable products. After watching his wife spend hours preparing Obe sauce one day he had an epiphany. He could create the delicious sauce his family loved, make it more readily available, and save home cooks precious time.

How Does it Taste?

Obe sauce has a unique flavour; it’s sweet and spicy and tangy all at once, and the texture is rich and velvety. With notes of black pepper, cayenne, paprika and garlic, it’s a complex flavour with just a touch of heat.

Previously Toety’s Obe sauce has only been available in African stores in Calgary, but since its launch last year, Adelodun says it’s grown in popularity. It’s now available in Toronto, Manitoba, and Saskatchewan, as well as shops in Edmonton, Lethbridge and Calgary. Adelodun thinks Obe’s popularity is due in part to it becoming popular outside Nigerian cultural circles, much like the aforementioned ketchup and Sriracha.

“Canadians are adventurous,” says Adelodun. “In a multicultural environment like Canada there’s a space for foods from Africa — there’s actually a market for this outside west Africans. We can share it with every other ethnic group too because of the multicultural nature of Canada.”

Popular in Nigeria, Obe sauce is often made from scratch, and the recipes are passed down from parents to children.

“Nigerian women make it at home but it takes about two hours to do it. They’ll stock tomatoes, peppers in a separate deep freezer and keep them off-season so they don’t run out.” says Adelodun.

Adelodun is pleased to have the chance to share his Obe sauce with a wider group of consumers, thanks to its arrival at Co-op where it will be carried in the International Foods aisle.

“We’re so grateful for the opportunity. Getting the support of a group like Co-op — it goes a long way.”

Adelodun hints that he’s not satisfied with just one Nigerian sauce on the shelves, saying new products are in development.

“We know we have a great product. We want to bring the flavour of west Africa to the world.

How To Use Toety Cuisines Obe Sauce

There’s no wrong way to use Obe sauce. Get creative and use it where you’d use other different sauces or marinades, or take your cues from some of the ways it’s used in western Nigeria:

Back to Top
Calgary Co-op Learn Meet the Producer: Obe Sauce
Back to Top