Make It Tonight with Sunnybrook sausages

While today it may seem more like a convenience food, sausage has a long history. The first sausages likely originated in the Middle East as a way of preserving the meats used in them. Today, sausage is made almost all over the world.

Sausages can be made from several different types of ground meats, including pork, beef, chicken, or turkey. The word “sausage” has Latin origins: salsus, means “salted,” which is a common way to preserve meats and was even more popular back when refrigeration wasn’t an option. The ground meat base in sausage is often mixed with salt, spices, other ingredients and encased in a skin, though more often now you can find sausage meat on its own, which is great for using in burgers, patties scrambles or other recipes where ground beef or pork might be called for.

Because sausage typically has the addition of spices, and also because it can be cooked in any number of ways, it makes an easy and flavourful meat base for many recipes.

This week we’re cooking with sausage and making some fun, family-style and feast-worthy recipes with Alberta-made Sunnybrook Sausage. For something quick, try the Perogies with Sunnybrook Cheddar Sausage. Want something to feed the whole family? Sunnybrook Sausage Jambalaya is a spicy, filling twist on a basic rice dish. Or try our Sunnybrook Garlic Sausage with stewed Peppers and baby potatoes. Whichever way you slice it; these recipes also make great lunch leftovers too! 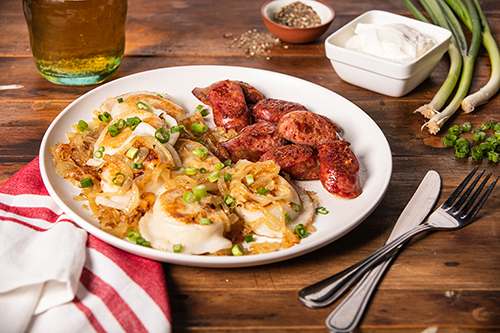 In a heavy pot with lid (such as a Le Cruset pot), heat oil over medium heat. Add onion, celery, peppers and thyme. Cook for 10 minutes until browned. Then add garlic, salt and pepper; cook for 2 more minutes.

Add Sunnybrook Sausage and cook for about 10 minutes, browning the sausage. Make sure to scrape the bottom so vegetables don’t stick. Deglaze with white wine and cook until the liquid is almost gone.

Add tomatoes, Tabasco, cayenne and rice. Cook for about 3 minutes until the rice’s edges start to go translucent. Add broth, bring to a simmer, and then cover. Turn down heat to low, and cook for about 30 minutes until rice is tender and liquid is almost gone.

Add shrimp to the top of the rice and cover again. Cook for 5 minutes until shrimp are cooked through. Sprinkle with parsley and serve. Spending Easter at home takes on a new meaning this year, but though physical distancing may prevent the usual long weekend brunches and egg hunts,... Turkey has become synonymous with festive gatherings, an ideal protein to serve when you have a dozen people around the table. Ahh, bacon. It’s the smoky and crispy fried pork meat that has legions of devoted fans.

Back to Top
Calgary Co-op Learn Make It Tonight: Sunnybrook Sausages
Back to Top