Make It Tonight With Grimm's Ham

All Grimm’s ham products are made with 100% Verified Canadian Pork™, and when starting with a whole half, you can chop, dice or slice it any size or thickness you like.

Last year, I posted a sheet pan full of grilled cheese sandwiches—yes, you can simultaneously cook as many as you can fit on a sheet by baking them at 450F for about ten minutes, flipping them halfway through, and they're perfectly evenly melted and toasty - I decided to do the same with a batch of croque monsieur. It was perfect timing, as

A croque monsieur sounds like a fancy restaurant menu item (and it is), but it’s not too complicated to make at home—it’s essentially a grilled ham and cheese sandwich smothered with cheese sauce, then given a few minutes under the broiler to get all bubbly and golden. Since you have to put them in the oven anyway, they’re perfect for cooking in large batches on a sheet pan. They’re great for serving a crowd, and as well-suited to breakfast (especially topped with an egg) as to lunch or dinner. They also make great use of leftover ham, if there is such a thing. 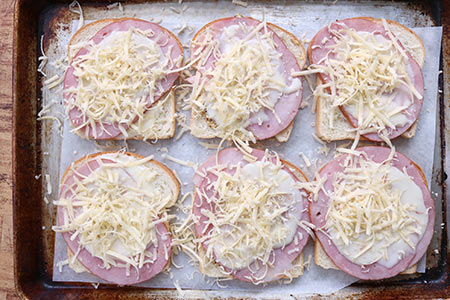 Directions:
Preheat the oven to 450˚F. Assemble as many sandwiches as you'd like to make, using thinly sliced ham and cheese, and spread the outside of the sandwiches with soft butter or mayo. Arrange them on a parchment-lined baking sheet and bake for 10 minutes, flipping about halfway through, until golden.

Meanwhile, set aside a small amount of the cheese (enough to sprinkle a bit on each sandwich) and put the rest into a medium bowl. Add the flour and toss to coat. Heat the milk in a medium saucepan and when it's steaming, add the cheese in handfuls, stirring until each addition melts before adding the next. Stir until smooth.

Pour some of the cheese sauce over each sandwich and top with a bit more shredded cheese. Return to the oven for 5 minutes, until the top is bubbly and golden. (If you like, switch the oven to broil, but watch it carefully—they should brown in just 1-2 minutes.) Serve warm.

Back to Top
Calgary Co-op Learn Make It Tonight: Grimm's Ham
Back to Top