Make It Tonight with European Wieners

Made in the style of mild eastern European sausages, European wieners are similar to pork hot dogs, only slightly longer and leaner.

Pork sausages and pretzels are classic eastern European fare—so why not combine the two? Wrap simple pretzel dough around the pre-cooked wieners and boil them first before baking to give them their characteristically chewy texture. (The dough itself is simple to make, but you could streamline things by picking up a bag of fresh pizza dough from the Calgary Co-op bakery—it’s very similar.)

If you do make the pretzel dough from scratch, keep in mind it should be quite tacky—if it sticks to your fingers, add a little more flour, but remember to err on the side of tackiness—it will get less sticky as it rests, and be wonderfully smooth to work with. Boiling the pretzels first for a minute or two in a pot of boiling water before baking isn’t as scary is it sounds—and don’t worry, believe it or not, the dough won’t unravel. Transfer them with a slotted spoon to a baking sheet and sprinkle with sesame seeds, or even coarse salt—it will stick to the wet surface—before baking them until they’re crisp and golden. 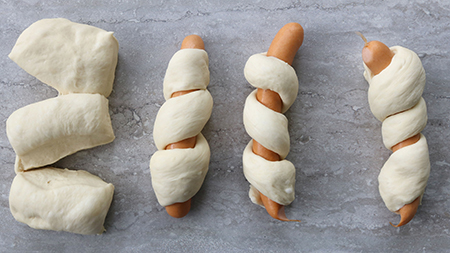 Instructions:
In a large bowl, stir the yeast into about half of the water; let it sit for about 10 minutes, until foamy. Add the rest of the water, milk and canola oil, stir in about 3 cups of flour and the salt. Add more flour and knead until the dough is smooth and elastic, and tacky but not too sticky. Cover with a tea towel and let rest for an hour.

Cut the dough into about a dozen pieces and shape each around a wiener. Let rest for 15 minutes while you bring a large pot of water to a rolling boil and preheat the oven to 425°F.

Boil a few dough-wrapped wieners at a time, so you don’t crowd the pot (they will swell), and simmer for about a minute per side. Remove from the water with a slotted spoon and place on a parchment-lined baking sheet. Sprinkle with sesame seeds and bake for 20 minutes, or until golden.

Back to Top
Calgary Co-op Learn Make It Tonight: European Wieners
Back to Top