Want to try a flavourful cut of pork that’s easy to prepare without having to deal with the bone? Try new Cal & Gary’s boneless centre-cut pork chops.

Boneless centre-cut pork chops come from the pork loin or rib. They are very lean and have no connective tissue, bones, and only the barest hints of fat.

What makes boneless centre-cut pork chops different from other cuts? Pork chops usually come from the shoulder, the rib, or the loin. Standard cuts still have the bone in, which can generally be easily separated from the meat in the centre. However, boneless pork chops are very easy to cook, and to serve and slice.

Boneless centre-cut pork chops are best cooked just like a bone-in rib or loin chops: they can be grilled, broiled, or seared. Chefs often suggest that boneless pork chops be brined or marinated beforehand to make it even more tender.

These Cal & Gary’s chops are relatively easy to cook in the kitchen and, since the pork has a mild flavour, it can be seasoned with a wide range of seasonings to bring out the extra taste. The other great thing about using pork chops is that it doesn’t tend to overwhelm recipes, letting you add extra flavour with other ingredients. Need a fast meal? Try the tangy taste of these Mustard Glazed Grilled Pork Chops with Herb Salad and German Potato Salad. Cook up a big feast with our Teriyaki Pork Stir Fry, or make this sweet and creamy Butter Pork—it’s like butter chicken, just with a white meat switcheroo! 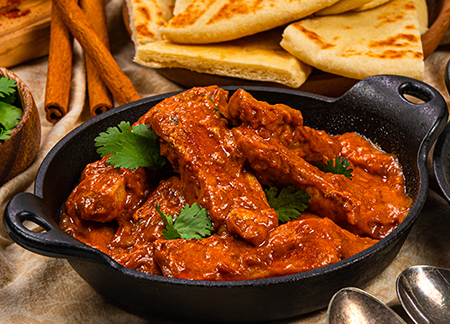 Directions:
Sprinkle the pork chops with salt, cut them into bite-sized pieces and set a large skillet over medium-high heat. Add a drizzle of oil to the pan and cook the pork for 2-3 minutes, until starting to brown.

Add the butter chicken sauce to the pan, stir to combine everything well, cover and simmer for 10 minutes, or until the pork is cooked through. Serve over steamed rice, topped with cilantro. Who doesn’t love roast chicken? Juicy, comforting and tasty, it’s a guaranteed crowd pleaser whether for a family meal or a dinner party (whenever we...