Simple, Yet So Overlooked 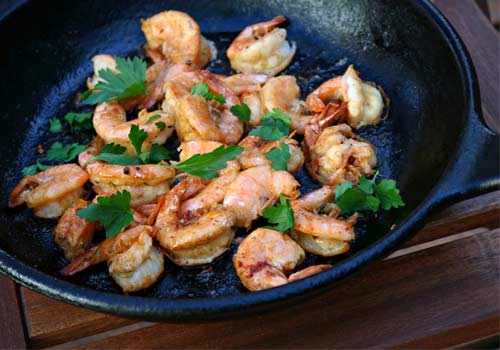 In the world of barbecue, buttery, spicy shrimp are some of my favourite things to eat. They’re also one of the simplest, yet often overlooked as a candidate for the grill. Large, shell-on shrimp and prawns can be cooked quickly any number of ways: after a quick toss in some kind of marinade, they can go directly on the grill (move them around with tongs as they turn opaque) or thread onto metal or bamboo skewers (I like doubling up the skewers so that they lie flat and don’t rotate on the skewers), or in a cast iron skillet set directly on the grill. I confess to preferring the latter; they turn out slightly less smoky and not charred, but you have the benefit of retaining all those buttery spices in the bottom of the pan to mop up with crusty bread afterward. A panful of shrimp makes a tasty appetizer while your family or friends are waiting for dinner, but can also count as the main course, with an easy green salad and a baguette.

Thaw your shrimp if frozen and if you like, butterfly them by slicing lengthwise from the tail to the head, without cutting all the way through. (This way, they’ll splay open as they cook.)

In a medium bowl, toss the shrimp with the melted butter, spice rub and a big pinch of salt, coating the shrimp well. Grill directly on a preheated barbecue or thread onto soaked bamboo skewers, or cook in a cast iron skillet on the grill, turning as needed just until the shrimp turn opaque. Serve immediately, topped with a handful of chopped parsley if you like, and some crusty bread for dipping. Shrimp is a surprisingly versatile, hearty and healthy seafood option that can add a lot to a meal. Steak and lobster are the ultimate pairing. Know worldwide as ‘surf and turf,’ both tender, buttery lobster and a seared steak are amazing entrees on... Meats like chicken and beef are pretty popular in Alberta, but fish is another tasty and healthy protein we sometimes forget about.

Back to Top
Calgary Co-op Learn Make it Tonight: BBQ Shrimp
Back to Top