Great on the Grill

or in Everyday Cooking

You’ve heard of grilled cheese, but how often do you grill cheese? The idea of grilling cheese may seem strange, evoking images of melty cheddar slices folding over BBQ grates. But cooking cheeses is popular in many cultures. If you’ve ever enjoyed middle eastern Halloumi, Greek Saganaki, or Indian Paneer, you’ve had cooked cheese. While these are familiar international appetizers, there’s another variety of cheeses that are perfect for grilling, and they’re made right here in Alberta. 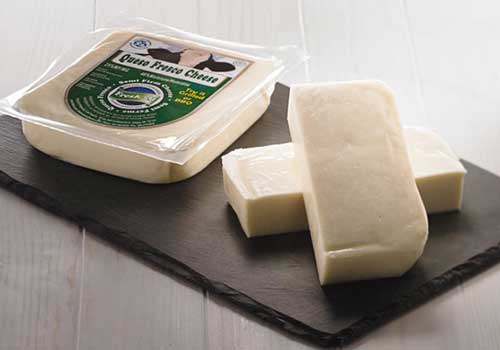 Queso Fresco
Queso Fresco is a semi-firm cheese with a pleasant, lightly salty flavour. This cheese won the first place in the Canadian Cheese Grand Prix in 2013 as the Best Grilling Cheese in Canada.

Queso Duro
Translated literally as ‘hard cheese’, Queso Duro is a firmer and saltier cheese than the Fresco. It’s ideal crumbled into salads and on Mexican foods and Latin dishes and could be compared to a Feta cheese.

Queso Cotija
This hard cheese has a strong and salty flavour that’s perfectly paired with spicy and flavourful dishes.

Queso Oaxaca
This Mexican-style cheese is similar to a mozzarella with a stretchier and stringier texture than the Cotija.

Latin Food Specialties’ Alejandro Rodriquez and Andreina Chavez started making these authentic Latin cheeses with Rodriguez’s brother in law Rafael Chavez, a professional cheesemaker, about eight years ago after the family relocated to Calgary from Venezuela.

“When we came to Canada we knew we wanted to get into the Latin cheese manufacturing business,” remembers Rodriguez. “We saw a great opportunity because Canada is such a multicultural country, and Canadians are interested in foods from all over the world. Once we started educating people about our cheeses and how they can be used, we saw a huge surge of interest. You’d think Latinos would be our main market, but no, it’s Canadians!”

Great on the Grill or in Mexican Dishes
Latin Food Specialties’ Fresk-O cheeses are great on the grill, and even simply searing any of the cheeses in a hot pan produces a tasty, tangy appetizer that will vanish in minutes. But these cheeses are also ideal crumbled in nearly any Mexican dish. If you normally put cheddar or jack cheese on your tacos, swap in Queso Paisa or Queso Fresco for a more authentic dish.

“You can even put them into lasagna instead of using mozzarella!” suggests Rodriguez.

Simple Cheeses with Big Flavour
Fresk-O cheeses are made with 100% Canadian milk. Once the cheese curds begin to form, they’re drained of their whey, pressed into shape and then salted. It’s a simple process that lets the flavour of the milk shine through, leaving a beautiful, rich, firm and creamy cheese.

Rodriguez says that at first it was a challenge educating Canadians about the joys and versatility of these Latin cheeses, but after eight years, people are catching on.

“People now know about our cheeses and how to use them, whether it’s on the grill or in recipes. They also know we’re one of the only places to get this kind of authentic flavour. We have people that will come to Calgary just to get some of our cheese, so now we know we want to expand and get it out across Canada and also export our finest locally made products overseas.”