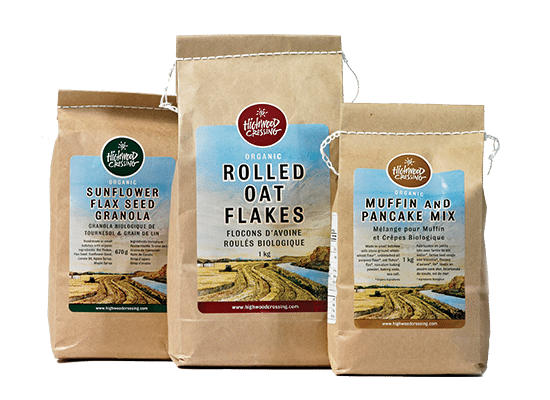 Located on a the banks of the Highwood River just outside High River, Alberta, Highwood Crossing Farm has been in Tony and Penny Marshall’s family for over a century, named for the spot where the land lowers to the water, making it possible for people to cross. Tony and Penny grow and process flax, oats, wheat and cold-pressed oils, and make their own granola, hot cereal blend, flours and baking mixes. Their brilliant yellow, organic, non-GMO canola is often referred to as Alberta’s olive oil; pure, with an intense flavour that varies from crop to crop. Highwood Crossing canola and flax is pressed only once, the nutrient-dense meal then sent to feed the turkeys at nearby Winter’s Turkeys and cows at Vital Green Farms. 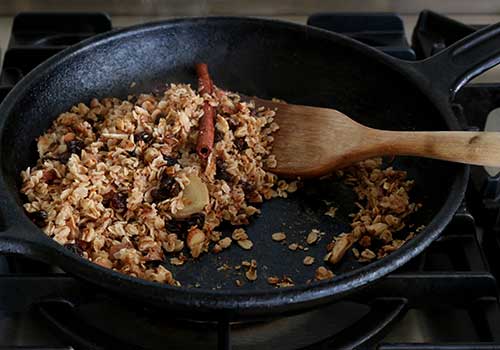 They are perhaps best known for their chewy old-fashioned rolled oats, which makes its way into granola, cereals and other products, but also makes the very best bowl of oatmeal. If you like yours with more separate grains, try this skillet technique: toast your oats in a wide, dry skillet (or add a bit of butter) over medium-high heat, until they turn pale golden and start smelling nutty. If you like, toast some chopped nuts and seeds along with the oats.

Add the water (use a ratio of about 2:1 water:oats) and stir until the oats absorb the water and get soft—this should only take a few minutes. Add a bit more water, or even some milk or apple juice, if the pan is dry but the oats still seem too firm. Add a shake of cinnamon too, if you like.

Serve with fresh or frozen berries, a drizzle of maple syrup or sprinkle of brown sugar, and milk or cream. Serves as many as you like. Perogies and Other Local Frozen Favourites

It’s never a bad idea to have a few quick meals tucked away in the freezer, and in Alberta, it’s common to have a bag... The largest distributor of Italian and specialty products in Western Canada, Scarpone’s has been a much-loved Calgary company since 1956—importing, packing and distributing products, including... Sometimes on a hot summer day, or after a job well done, you just want to crack open a cold one to feel truly refreshed.