Have you ever wondered why we eat certain foods?

Have you ever wondered why we eat certain foods? How we came to cultivate and eat some things, while others fell by the wayside? Like who was the first brave human to crack open a shell and eat a raw oyster?

There are all kinds of interesting stories about the food we eat. We’re starting a regular series that will profile some food basics, how they came to be staples in the human diet, and why we love them so much. 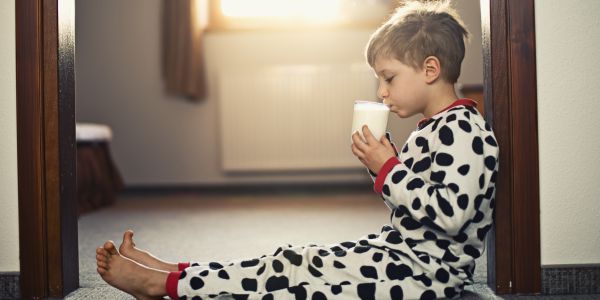 Milk is a staple in most people’s grocery carts. It’s the drink that goes best with chocolate cake and peanut butter sandwiches. It’s what we give to kids to develop healthy bones, and for athletes, it’s a protein packed thirst-quencher.

But how did we come to drink cow’s milk, anyway?

Humans have been drinking milk for centuries. But have you ever wondered how or why we came to want to drink the milk of a whole different species? It turns out, we weren’t always able to drink it and enjoy it.

“During the most recent ice age, milk was essentially a toxin to adults because — unlike children — they could not produce the lactase enzyme required to break down lactose, the main sugar in milk,” according to an article in the journal Nature.

But, perhaps recognizing milk as a readily available source of protein, cattle herders and farmers found they were able to reduce the lactose in milk by changing it; fermenting it to make things like yogurt and cheese.

The Nature article goes on to explain, “several thousand years later, a genetic mutation spread through Europe that gave people the ability to produce lactase — and drink milk — throughout their lives. That adaptation opened up a rich new source of nutrition that could have sustained communities when harvests failed.”

A study estimates we humans started drinking milk in ernest in Europe and the Balkans as far back as 7,500 years , and that the practise may have even gone as far back as 10,000 years. Today we enjoy milk in everything from our coffee, to baking,to fine cheeses, even drinkables like yogurt and Kefir.

While the perception might be that everyone drinks milk, the truth is only about 35% of adults can digest milk past age 7 without getting sick. (Read our previous blog on milk alternatives available at Calgary Co-op stores)

While there are studies today that are both pro-cow’s milk, and con, many adults today grew up drinking milk, “for healthy bones” (thanks to the calcium). But milk is packed with other essential nutrients too, like potassium, and vitamin D (which is added milk in processing.) While both sides of the milk debate continue to weigh the pros and cons, it seems the old adage, “everything in moderation” applies.

Back to the history: dairy cows came to North America as far back as the 1600’s, providing farmers and villagers with a ready supply of fresh milk. By 1800, the number of cattle had exploded across the new world, sine they could provide both milk and meat.

While dairy cows are specially bred to produce large volumes of milk, any breed of cow can supply it. According to the Purebred Dairy Cattle Association there are 7 major dairy breeds in the United States: Holstein, Brown Swiss, Guernsey, Ayrshire, Jersey, Red and White, and Milking Shorthorn. Often cows are used for milk production for about 4 years before being sold to the beef industry.

Milk and milk products are now a huge part of our culture and our food sphere. It’s been around thousands of years, and will likely stick around a few thousand more. So raise a glass and toast dairy farmers who continue the tradition of bringing fresh, delicious Canadian milk to Calgary area Co-op stores.

Back to Top
Calgary Co-op Learn Food Basics: Milk
Back to Top