Delicious Recipes that Use Canned Food

Canned fruit to the rescue!

Delicious Recipes that Use Canned Food

Canned foods get taken for granted. You can almost always find a tin of soup or ravioli in the pantry when you’re hungry.  And when the fresh veggies in the fridge are spoiled, chances are there’s some green beans, peas or corn squirrelled away somewhere. But not many of us plan meals or dishes by starting with a can. But we should!  We should celebrate the heroes of the food preservation world.  Here’s how…

Necessity is the mother of invention

Humans have a long history of preserving our food.  We dry it, pickle it, preserve it in salt rubs, ferment it and smoke it. But the ability to make food stable in a container wasn’t invented until just the 1800s when an enterprising French chef used cheese and lime to seal champagne bottles filled with meat and veggies, and the process of canning was born.

That chef was named Nicolas Appert and his years of experimentation and finally success won him a prize the equivalent of about $17,000 from the French government, who’d requested someone find a way to keep food that could be used to safely and reliable feed French soldiers on the battlefield.

Gone are they days when we needed to pack cans of meat and vegetables when we travelled or went to work, but canned food still exists as a safe and convenient way to store food for later use. 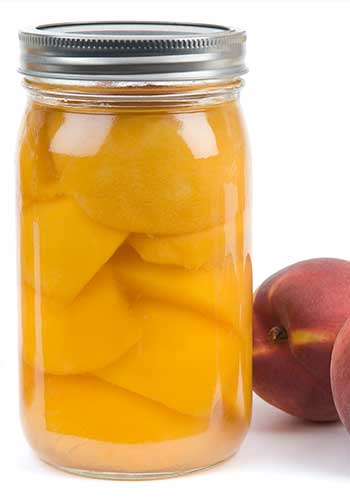 Canning, which can be done in either a glass jar or a can uses heat to kill micro-organisms that can cause food to spoil. During the heating process air is driven out of a sealed jar and as it cools a vacuum seal is formed, preventing any new micro-organisms from getting in.

Canning food is usually done at the height of ripeness, so often canned food is at its peak for flavour, freshness, and colour. For many years, fruits that could not reliably be imported fresh could be made available canned; think pineapple or mandarin oranges. Canning also allows supplies of summer fruits like pears or peaches to last much longer.

There are some easy-to-make recipes where canned food can be the star and give you that taste of summer.  Plus these are good in a pinch when you want to enjoy some of those flavours, but the fruit isn’t in season.

Canned fruit to the rescue!

These simple peach shortcake muffins use canned peaches. I keep a can of fruit on hand at all times so I can whip these up whenever we’re in need of a quick breakfast or a simple dessert (just add whipped cream!).

Combine first five dry ingredients in large bowl. Cut in margarine/butter with pastry blender until crumbly, then add milk and peaches, stirring just until barely blended. Spoon into paper-lined or well-greased muffin cups. Sprinkle with topping mixture of sugar and cinnamon. Bake at 400°F for 20 to 25 minutes or until set and golden. 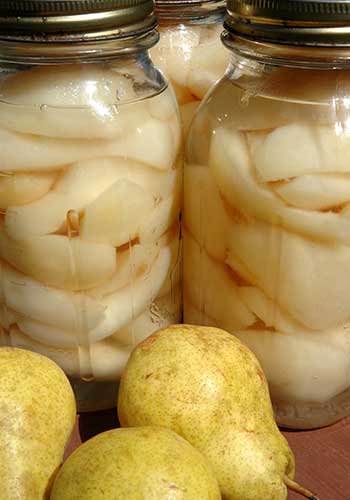 My mother and grandmother both swore by this recipe, and it was often served as a simple salad or first course. It can easily be a savoury dessert too. The softer texture and sweet ripeness of the canned pears pairs beautifully with the cream cheese mixture.

Drain pears, and place one half per person on some shredded lettuce in small individual bowls.

Using an electric beater or stand mixer, blend the cream cheese and Miracle Whip with salt and pepper together until it’s creamy. Scoop it into a pastry bag fitted with a decorative icing tip, and pipe filling into the centre of the pears. Refrigerate until ready to serve.

*This recipe will likely serve 6 with a smaller can, but since it’s hard to count the exact number of pear halves you’ll find in the can, if you need to be certain, get an extra can, or a larger one.

While you’re prepping some canned food dishes this week, spare a final thought for those French soldiers; the can opener wasn’t invented until decades after the canning process was perfected, so early cans had to be opened with bayonets.