It's Cheese Festival time at Co-op where we celebrate all the forms of creamy, dairy goodness.

All month you'll find different cheeses featured and we're hoping to inspire you with recipes, ideas and information. We're kicking it all off with Swiss Cheese.

Brace yourselves: Swiss cheese isn't really Swiss. It's an American invention designed to mimic true Swiss varieties known as Emmental and Gruyére. The Swiss cheese that many of us know is a firm processed cheese made from pasteurized cow's milk. It's recognizable by its slightly yellowish hue and big holes, though modern processes mean the holes can be smaller, or even non-existent.

Swiss cheese has its origins in Europe thanks to those two aforementioned cheeses. Emmental cheese is produced in the Emmental region of Switzerland. Cheese.com says:

"It's a hard cheese made from cow's milk with a hard, thin rind. The aroma is described as, "sweet with tones of fresh-cut hay. The flavour is very fruity, not without a tone of acidity. Emmental is considered to be one of the most difficult cheeses to be produced because of its complicated hole-forming fermentation process."

Gruyére meanwhile is named for a Swiss village. It too is an unpasteurized cheese but it's considerably softer.

To cheese.com again where Gruyére is described as having a "natural, rusty brown rind that's hard, dry and pitted with tiny holes. The cheese is darker yellow than Emmental but the texture is more dense and compact. Slightly grainy, the cheese has a wonderful complexity of flavours: at first fruity, and later it becomes more earthy and nutty."

How Does Swiss Cheese Get Its Holes?

The prevailing explanation for how Swiss cheese (or Emmental or Gruyére) gets its holes has been courtesy of bacteria formed in the cheese making and aging process. Simply put, the bacteria give off carbon dioxide, which creates air bubbles in the stretchy cheese

But a study done in 2015 by Swiss conglomerate Agroscope found it's more likely to be the existence of tiny hay particles, which drift into the milk through the milking process, that trap air and allow those distinctive bubbles to grow.

If you think the number of holes in Swiss cheese seems smaller today than years ago, you might be right. As farming practices have been modernized, it becomes less likely that these microscopic impurities can drift into the milk. But it still happens.

Swiss Cheese is made in huge wheels. They're often aged and shipped as giant blocks, then carved up into wedges for sale at the deli, but they may also be cut and packaged right at the cheese-making facility.  The process of making Swiss cheese ensures it has almost no rind so you get a nice creamy cheese right through the whole wedge.

Swiss cheese has a distinct strong, nutty flavour but it's not sour or bitter, instead it's creamy and buttery.

Especially when compared to Gruyére or Emmental, North American Swiss has a milder flavour that makes it a natural pairing with fruits like pear or apple as well as melted on turkey or ham sandwiches. 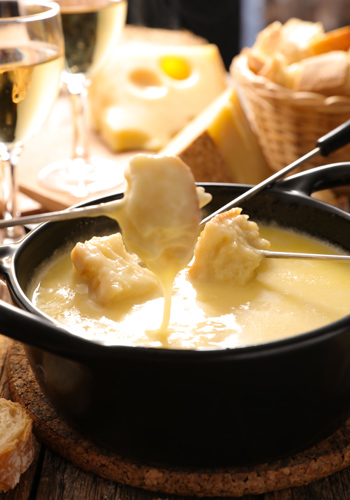 New research into Swiss cheese (yes, people really research this stuff) has found it has numerous health benefits, and some have even gone so far as to call it a superfood.

A certain bacteria found in Swiss cheeses has been shown by researchers at the University of Korea to reduce inflammation, which could promote longevity and even boost the body's immune system.

Swiss cheese adds a nice nutty flavour and creamy texture to recipes. It can be the star of the show or an element among other flavours since it holds its own well.

Cheese fondue is a classic. In essence it's just melted cheese and wine, and it makes a beautiful warm dip for fresh bread on a cool evening. Click here for an easy recipe. 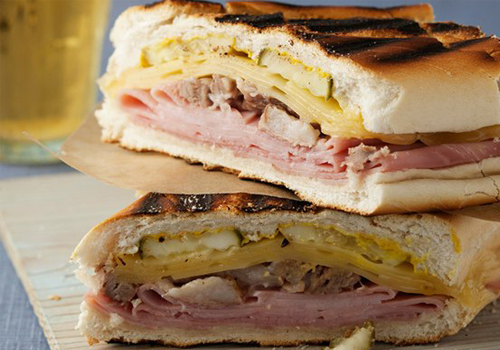 This sandwich has its origins on the small island nation. Made up of deli meat, pickles, Swiss cheese, and a distinctive 'Cuban' loaf, it's a delicious change from traditional sandwiches or subs.

Go ahead and pick up some Swiss cheese, or Emmental, or Gruyére on your next visit to Co-op and try creating one of these fine recipes.

Next week we reveal the secrets of Brie.

Back to Top
Calgary Co-op Learn Cheese Festival: Swiss Cheese
Back to Top