Made with Real Ingredients

Just As If You Were Making Your Own Sauces at Home

If you're of a certain age, you might remember the commercial for a certain brand of ketchup. It featured people holding a bottle of ketchup upside down and patiently waiting for the condiment to flow from the bottle. The sentiment was, 'good things come to those who wait'. The same sentiment could be applied to a created-in-Alberta sauce with similar viscosity.

"We tell our customers to take our BBQ sauce out of the fridge an hour before they want to use it and let it come to room temperature," says Tamara Ternes, owner of Cattle BoyZ, makers of award-winning BBQ Sauces, seasonings and rubs. "It becomes easier to pour."

That's not the only education Cattle BoyZ provides to its customers. They often ask what the proper way is to open a bottle of Cattle BoyZ Original BBQ sauce, Sweet Chili BBQ sauce, or Chipotle Maple Bacon sauce—they all come with the same distinctive latch-top lid.

"We get so many questions about how to open the latch properly, but truly it's easy; just use your two thumbs and push it up! It's much easier than those beer bottles that look similar, because our product is obviously not carbonated, so they actually open easily."

Cattle BoyZ also makes a line of rubs and seasonings, including Cattle BoyZ Smokey Southwest, Smokin’ & Grillin, Gourmet and Big Country Garlic, and all the company's products are available at Co-op stores. 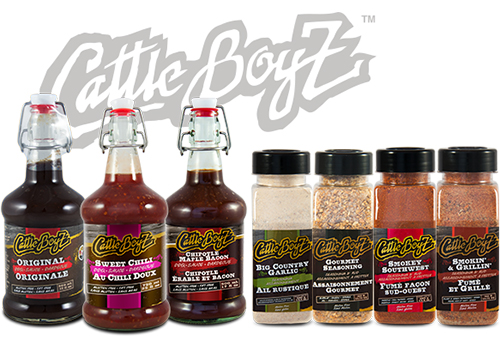 "Our sauces and rubs are all made with the best ingredients. There is no high fructose corn syrup, no MSG added, and they’re without allergens or gluten," explains Ternes, "We make them with real ingredients, just as if you were making your own sauces at home; there's real tomatoes, molasses, real bacon, for example in our Chipotle Maple Bacon sauce. And all our products are gluten free, so everyone can enjoy them."

Cattle BoyZ started in 1996. Ternes' late husband used to love creating new sauces in the kitchen at home. "We'd be in the kitchen and he would have at least five different kinds of sauces all in these jars, all over the counters, and we'd have a taste test and make notes." remembers Ternes, "He loved to experiment and play with flavours. He was a rancher from the Bieseker area, and had a passion for great quality meats and fabulous flavours."

Ternes inherited the company after spending years in the oil and gas business, and has since thrown herself into the continuing success of Cattle Boyz Foods. 2018 saw Cattle BoyZ' sales peak at an all-time high.

That success Ternes attributes to a very unique flavour profile that's like no other BBQ sauce, plus the unique ability of Cattle BoyZ sauces to adhere to the meats and veggies while grilling, so you don’t lose any of that amazing taste to the bottom of the BBQ.

Of course, these sauces don't need to be pigeonholed as a topper for BBQ'd meat, chicken seafood and veggies. They work well as a stir-fry sauce, a glaze, a marinade, a simmering sauce for meatballs, or to give vegetables a pick-me-up. Ternes also recommends it as a dipping sauce for chicken fingers, and potato wedges.

"For us, it's all about the ingredients. We choose ingredients that are good quality, and I know you’ll really taste the difference."