One of the Calgary Food bank’s most popular events is on, and this year a team from Calgary Co-op is taking part. 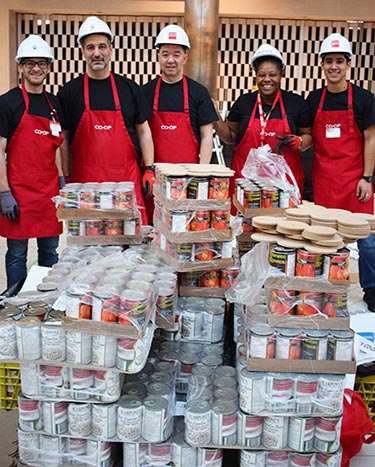 Canstruction is an annual Food Bank fundraiser where teams of engineers, designers, architects and builders create extraordinary structures out of non-perishable food items.

Sculptures can range from about 1,000 cans to 10,000 cans. These sculptural creations are judged, exhibited to the public at Southcentre Mall and then ‘de-canstructed’, with all food going to the Calgary Food Bank.

“This is our first year taking part in Canstruction,” said Miguel Garcia, Project Coordinator, Facilities Development and Real Estate at Calgary Co-op, and Canstruction team leader. “We couldn’t be more excited to take part in this event and to compete against some pretty strong local teams.”

This event is actually part of a wider international project, and Canstruction® Calgary is the local chapter of Canstruction, a global anti-hunger project founded by the Society for Design Administration, an affiliate organization of the American Institute of Architects. The event is held in more than 50 cities across North America. 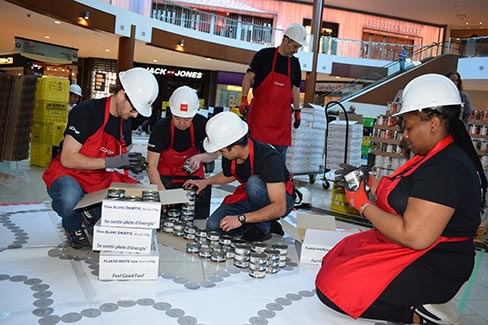 Once built, the Canstruction creations stay on display until Thursday, March 19, 2020.

Each year there is a theme that teams must base their design around.

“We used approximately 2,800 cans in making our Canstruction creation, an electric guitar and sound waves. We thought this was a great representation of this year’s theme, which is Rock Can Roll,” says Garcia. “It was a real Calgary Co-op team effort that we’re proud of, and even more happy that all these cans will be going to families that need them.” 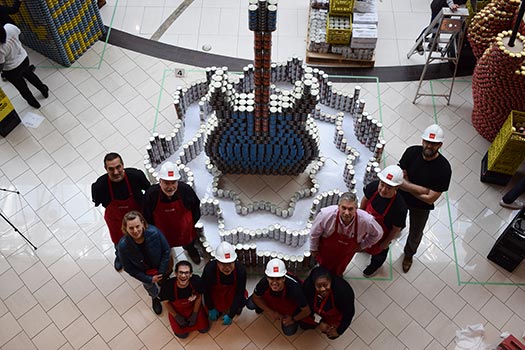 You may think the Calgary Co-op team would have a distinct advantage, since cans are in pretty much unlimited supply at our stores, and that it’s possible for the team to walk into Co-op and raid the shelves, scooping up as many cans as needed. Not so: all the cans are donated by partners and suppliers.

Scarpones has donated cans including White Cannellini Beans and Fire Roasted Diced Tomatoes for the soundwaves. Brunel Commercial Interiors helped out by producing the templates that the structure will balance on. These templates were created on a computer using 3D modelling software.

The Co-op team worked first on a mini version of the guitar, choosing cans for their size and shape and how they’d look in the final design, and to make sure the sculpture would be able to support itself. Of course the cans were also chosen because tuna, beans and tomatoes are in high demand at food banks.

“Each different can in the design was then modelled and uploaded into 3D software so we could get accurate templates for our design, and can counts,” Garcia reveals. 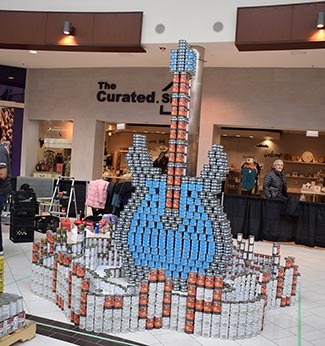 The body of the guitar will be made out of tuna cans since the smaller cans allow for more definition in the curves of the guitar. The tuna cans and the rest of the cans needed will be provided by the Co-op Community Foundation.

Be sure to vote online for your favourite creation and don’t forget you can always donate to the Food Bank by purchasing a few extra non-perishable groceries and leaving your donation with Calgary Co-op. While today it may seem more like a convenience food, sausage has a long history. Back to Top
Calgary Co-op Learn Canstruction
Back to Top