There's a Blue for all Tastes

Cheese Festival continues at Co-op where we've been celebrating all the forms of melty dairy goodness.

What is Blue cheese?

Blue cheese is a cow's milk cheese that's known for the distinctive blue veins that run throughout the cheese. The blue veining is actually from of two types of mould which have been introduced to the cheese, usually Penicillium roqueforti or Penicillium glaucum.

Often Blue cheese has a pungent scent that comes directly from those fungi.

Where did Blue Cheese come from?

The story goes that someone, a farmer, a shepherd, or even a lovesick school boy abandoned their meal of bread and cheese in a cave, only to come back months later to find it covered with mould. Instead of being repulsed and tossing it out, legend has it, the farmer/shepherd/schoolboy sampled this colourful and pungent creation and declared it divine.

More likely, however is that the mould formed naturally on cheeses as they were being aged by our ancestors in caves where the cool, damp environments helped to preserve many kinds of cheese. Who was the first brave soul to sample this mouldy cheese and share it with family and friends? We'll never know.

How does Blue Cheese get its colour?

Much of the making of Blue cheese is similar to other types of cheeses; cultures are added to milk which thickens it. The addition of rennet further firms up the milk into curds. They're salted and pressed into moulds, then aged.

Usually after the cheese has been moulded, the Penicillium bacteria are introduced and allowed to grow. Small holes are often punched into the wheels of Blue to allow the mould to spread inside. Sometimes, you can see the straight lines in the finished cheese where the small skewers punctured the skin. 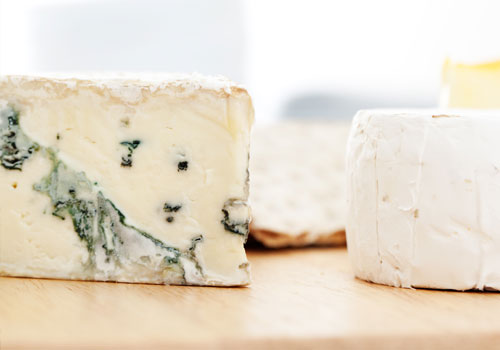 Creamy: Most often a creamy Blue has not been aged that long. Some varieties of Blue may also see cream added to the cheesemaking process while the cheese is in curd form to add to its texture.

Younger, creamier Blues are often the mildest tasting, and are a good choice when trying to convert newbies. Creamy Blues are great for spreading on crackers, bread and using in sauces. 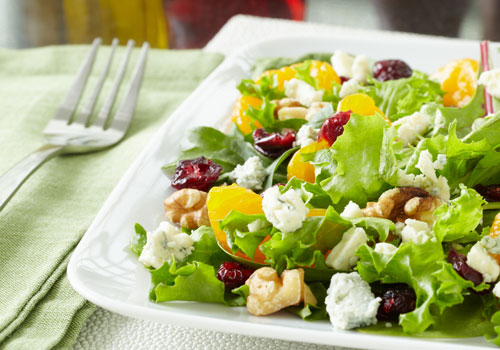 Many Types of Blue

You'll see many different kinds of Blue cheese in the cheese counter at Co-op. The varieties and subtleties are nearly endless:

Some Blues, like Roquefort and Stilton for example have what's called Protected Origin designations, which means that in the place they originate, there are specific sets of criteria, protocols or rules for how the cheese is made.

Stilton cheese must made in Derbyshire, Leicestershire, or Nottinghamshire in England, and only a handful of farms are permitted to make it.

Roquefort cheeses must be aged only in the Combalou caves in Roquefort-sur-Soulzon in France in order to qualify for their label.

Why is 'mouldy' cheese safe to eat?

For most of us, as soon as something is mouldy, we throw it out. We wouldn't dream of eating it. So why, then, do we prize mouldy cheese?

In many cases, mould simply tastes terrible, which is why our ancestors would have pitched it out. In cases where the mould adds flavour, it's often not harmful to our bodies.

"Not only is it safe, but it can also be healthy (Penicillium roqueforti and Penicillium glaucum have natural antibacterial properties and ability to over-take pathogens. Moreover, our bodies use a variety of wild flora for digestion, development and immune systems," explains an article in the British paper The Independent.

In fact, the antibiotic Penicillium is derived from a slightly different strain of the same mould, Penicillium chrysogenum.

How do I know when my Blue cheese is bad?

A popular question about Blue cheeses is, 'how do I know it's gone bad if it's already mouldy?'

The general rule of thumb is that if it's turning colours other than the ones it came with, toss it. Blue connoisseurs will also tell you that quality, fresh Blue cheese has a sweetly-pungent odour; if it smells really sour, ammonia-like, or just plain bad, it's past its prime.

If you're new to Blue cheese, ask at the Co-op deli for a recommendation for one of the milder, creamier Blues to experiment with. If you're a Blue cheese master, you'll find new types to challenge your tastebuds too.

Back to Top
Calgary Co-op Learn Cheese Festival: Blue Cheese
Back to Top