Get the Most Out of the BBQ season

20 Tips to Get the Most Out of the Grilling Season

With days lengthening and temperatures rising, Calgarians are getting outside to clean up their grills and do some dining alfresco. Here are a few tips and tricks to keep you and your family safe and well-fed while eating in the great outdoors.

1) Always make sure your grill is preheated before you start cooking—a hot grill will prevent food from sticking.

2) Keep a spray bottle filled with water close by to tame flare-ups, which can be caused by dripping fat.

3) When taking the temperature of your meat, make sure the thermometer doesn’t touch bone, which can conduct heat more efficiently and provide an inaccurate reading. 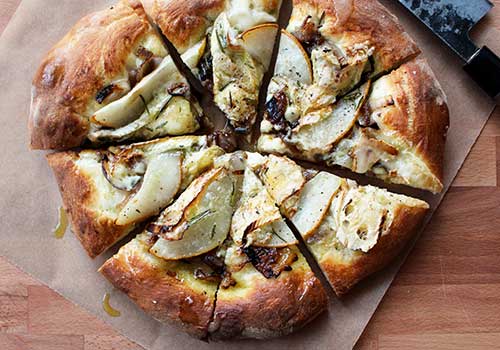 4) Cook your pizza on the grill for a charred, slightly smoky crust reminiscent of a wood-fired forno oven. It works well for frozen pizzas, or toss rolled fresh dough directly on a hot grill—it won’t stick, promise—, then turn with tongs, top with sauce and toppings, reduce the heat to low and close the lid. This will create an oven-like environment to melt the cheese as it finishes cooking in about 10 minutes.

5) Let steaks develop a nice crust on the bottom before flipping them—let them sit, undisturbed, for a few minutes, without moving them around.

6) If you’re cooking kofta, satay or other food on wood skewers, soak the skewers first, and then wrap the exposed ends in foil to keep them from burning on the barbecue. You could also line them up along the front of the grill, so that the handles of the skewers are sticking out over the dials, rather than over the heat.

7) Use foil pie plates to make sturdy veggie packets: use almost any combination of root vegetables you like, peeled and chopped into pieces about the same size, tossed in oil, with salt and pepper or some fresh or dried herbs. Cover tightly with foil and place on the grill. Close the lid and grill until vegetables are tender throughout and browned and crisp on the bottom and edges, about 35 to 55 minutes (depending on the type of vegetables used). 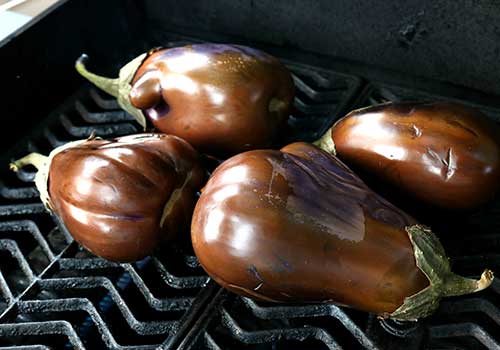 8) The key to cooking vegetables directly on the grill is keeping the heat on the low side. Use large chunks of oiled peppers, thickly sliced onion or winter squash, or thread large cubes onto flat metal skewers — they make grilling vegetables a breeze.

9) Use a cast iron skillet to make “chicken under a brick”—place chicken, skin side down, on the cooler side of a preheated grill, then place a cast-iron skillet on top to flatten. Close the lid and grill for 10 to 15 minutes, or until the skin is well browned and crisp. Turn chicken over, replace skillet and grill until leg joints move freely in their sockets and the temperature at the inner thigh is 165°F/74°C.

10) Cook burger patties in a large, heavy skillet set on the grill or on bricks over hot coals. After flipping them, top with cheese, and loosely cover with foil to help it melt as the burgers finish cooking through.

11) If cooking burgers on the grill makes you nervous, try grilling thick slices of cold (cooked) meatloaf - it’s a great way to reheat leftovers, and they taste just like burgers!

12) To clean your grill, wad up some paper towels, dip in some vegetable oil, and use tongs to rub over your grate to clean it while it’s still warm. 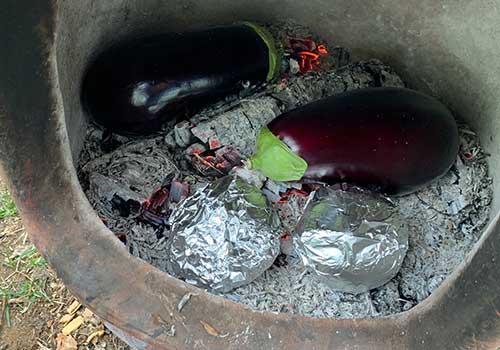 13) Take advantage of your evening fire pit by cooking over a well-established bed of coals; ideally, you’ll enough to room to move coals and logs around, to create hotter and cooler cooking areas. Try arranging large rocks or bricks to make a platform to set a cast iron skillet on.

14) When your fire is dying down, try tucking whole winter squash, or wrapping whole eggplant or sweet onions in foil, and tucking them in the hot coals as they cool overnight. In the morning, you’ll have smoky roasted vegetables you can use in dips, stews, sandwiches or on pizza.

15) When you’re brushing chicken or other grilled meats with a sweet sauce, like bottled barbecue sauce, brush it on toward the end—the sugar it contains can cause it to burn quickly. 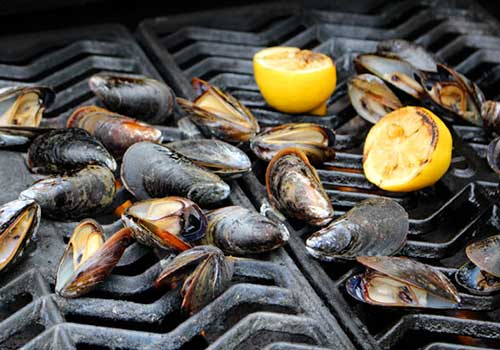 16) Toss fresh mussels and clams directly on the grill in their shells; it will take about 5 minutes. Discard any that don’t open. Melt butter in a small skillet or saucepan on the back of the grill to drizzle overtop.

17) Toss lemon halves cut-side-down on the grill alongside; they will get smoky and charred, and soften so that they will squeeze more easily, and release more juice over your fish or seafood.

18) Salty, briny semi-firm halloumi cheese can be cut into slabs and cooked directly on the grill - or in a small cast iron skillet set over an open flame or nestled into hot coals. Slice the halloumi into ½-inch thick slices, insert small skewers if you like, and cook directly on a grill or in a cast iron skillet over hot coals, with a lime cut-side down alongside, until the cheese is crisp and golden on each side and the lime is soft. Serve with the lime squeezed overtop. 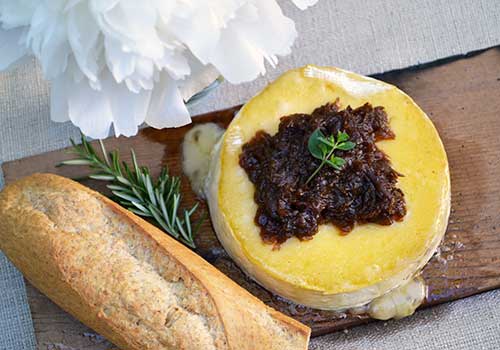 19) Try planking a small wheel of brie instead of the usual salmon; soak a food-grade cedar plank (available in the seafood section) for at least half an hour, then set it on the grill until it starts to smoulder. Slice the rind off the top of a small wheel of brie and place it on top, along with a spoonful of preserves, chutney or caramelized onions, if you like. Close the lid and cook for 3-5 minutes, until the cheese is warm and starting to ooze. Serve directly from the plank (set it on a baking sheet or cutting board to protect your table from the charred wood) and serve with crusty bread or crackers.

20) Try cooking fresh naan directly on the grill—the intense heat and fire mimics a traditional tandoor oven. Toss the rolled-out dough directly on a preheated grill and turn with tongs, brushing with oil or melted butter, until puffed and char-marked. For garlic naan, crush a clove of garlic into a ramekin of oil or butter to brush over both sides. Sprinkle with salt before serving.

Sometimes it’s the finishing touch that makes all the difference to a dish—an extra sprinkle or drizzle can add texture and balance flavours. A name is significant. Whether it’s your name-name, or your corporate identity, a a name is the label we wear out into the world.