Make It Tonight with Emmental Cheese

This is one time we want to be cheesy! Emmental cheese is a flavourful and ultra melting cheese with just the right yummy for recipes.

A warm and melting cheese dish is just the thing for the cold winter blues. Emmental cheese (also written emmenthal, emmentaler) is a fairly famous cheese from Switzerland. It’s a semi-hard cheese made from cow’s milk with a pale yellow colour, big holes or bubbles, and a high-fat content which imparts a buttery richness to dishes.

Don’t confuse Emmental with Swiss cheese! Though they both have holes (a side effect of the cheesemaking process where gas bubbles form inside the cheese), Swiss cheese is an American copycat of Emmental, and tends to be much paler and milder in flavour. For these recipes, we recommend the real deal, since Emmental has a nutty taste that’s distinctive and adds complexity to these dishes.

Depending on the properties in the Emmental, it is aged anywhere from four to twelve months. Younger Emmental cheeses are fruity and milder, while more mature cheeses have more complex and tangier flavours.
Emmental cheese is an ingredient often used to make fondue because it melts so well. This property also makes it an excellent cheese for casseroles, grilled cheese sandwiches, pasta, and gratins. You can also enjoy it sliced or cubed on a cheese platter with fruit or cured meats as well, or as a stuffing when you’re looking for a melting centre, as in our Chicken Cordon Bleu with Emmental Cheese.

In addition to that recipe, we hope to tempt you with our pillowy Seared Gnocchi with Emmental Cream Sauce (using arugula, garlic, and bacon or pancetta) or go classic with our bolder twist on traditional Mac n’ Cheese: Emmental Cheese Baked Shells. 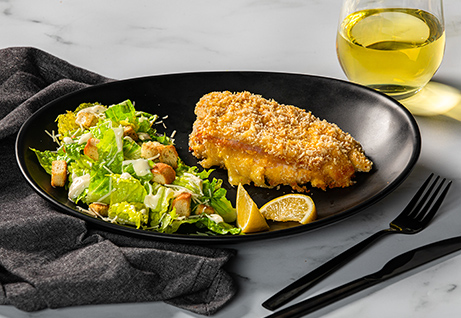 Take each chicken breast and butterfly cut it, slicing it length-ways to resemble a book. Make sure to keep part of the edge intact to hold the chicken breast together. Open chicken and place a slice of ham and Emmental cheese into the slit of each breast.

In a bowl mix flour with salt, pepper and onion powder. In a sperate bowl beat egg with water. In a third bowl mix Panko with Parmesan.

Now it’s time to bread the chicken. Place chicken in the flour mixture, now dip into egg wash and then into the Panko making sure to squeeze the bread crumbs into the chicken.

Place on a parchment lined baking tray, bake in the oven for 15-20 minutes until golden brown and reached 165°F internally.

Remove from the oven and serve with Caesar salad.

While it’s nice to have something delicious warming in the oven, making your house smell wonderful, there are plenty of party-worthy nibbles that are happy...

Cheese platters are classic party fare, but they’re also ideal when you’re entertaining on a smaller scale; you could assemble one for two or ten,...

Holiday entertaining will be different this year, without the usual bustle of holiday parties, work obligations and school performances, nor the option to host your...

Back to Top
Calgary Co-op Learn Make It Tonight: Emmental Cheese
Back to Top