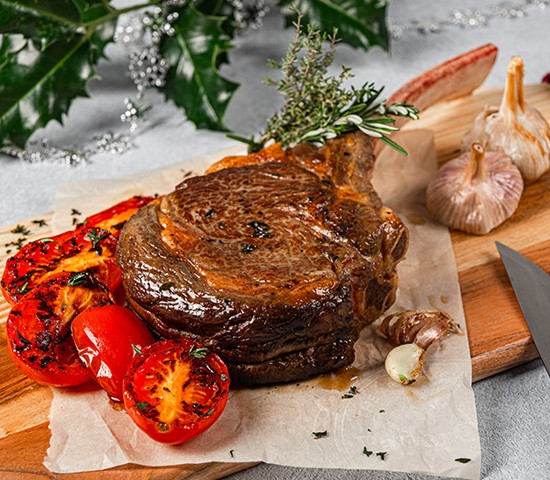 Generously season steak with salt and pepper. Cool oven down to 250 degrees F.

Place steak on wire rack in a baking pan, wrap bones with foil and place in oven. Cook the steak until probe thermometer reaches 46 C (115 F), about 40 minutes.

While steak is cooking add ⅓ cup of whisky to a sauce pan, heat and then flame off the alcohol.

Add ⅓ cup maple syrup to whisky and simmer for about 8-10 minutes until reduced to a glaze. Make sure to stir every few minutes. Finish with 1 tbsp whisky. Cool for later.

Sear tomatoes, cut side down in hot skillet until blackened. About 3-4 minutes. Remove and set aside.

Just before steak comes out of the oven, add 1 tbsp of oil to a cast iron skillet and heat on high until smoking.

Add the steak, butter, smashed garlic clove, thyme and rosemary to the skillet.

Cook until both sides are well browned. Make sure to roll the edges of the steak so they get a nice caramelized crust.

No need to rest steak, just glaze with whisky sauce, slice and serve with tomatoes.