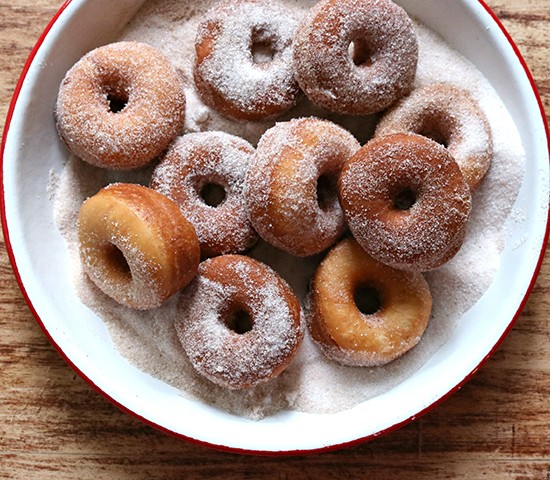 In a large bowl, stir together the yeast and water; set it aside for 5 minutes, until it’s foamy. (If it doesn’t foam, throw it out and buy fresh yeast. It won’t foam much, but if it just sits there and does nothing, it’s inactive.)

Add the flour, milk, butter, egg, sugar and salt, and stir until you have a soft, sticky dough.Stir for a minute or two, then cover and set aside for an hour or two.

Turn the dough out onto a lightly floured surface and pat with floured hands until it’s about 1/2 inch thick. Cut out as many rounds as possible with the rim of a shot glass, and poke a hole in each with a chopstick or your finger, stretching it out a bit as it will puff up as it cooks—make the hole bigger than you want it to be once it’s cooked. If you like, cover with a kitchen towel and let them rise for another 20-30 minutes (this isn’t necessary, but will produce lighter doughnuts).

Heat about 2 inches of oil in a deep, heavy saucepan until it’s hot but not smoking. You’ll know when it’s hot enough by dipping in a piece of bread or a bit of dough – it should start sizzling right away.

Cook the doughnuts 5-6 at a time, depending on the size of your pot (you just don’t want to crowd it too much), turning occasionally with tongs or a slotted spoon, until puffed and golden brown, about 2 minutes per batch.

Reroll the scraps once, or just cook them as scraps—these pieces tend to be our favourites.

Transfer to paper towels to drain, then toss in cinnamon-sugar while still warm. Makes a few dozen mini doughnuts.

Topping: Cinnamon-sugar is classic topping; mix about 1/2 cup sugar with a teaspoon or two of cinnamon, or just use regular or powdered sugar (without the cinnamon). They can also be dipped or drizzled in a simple glaze and topped with sprinkles.