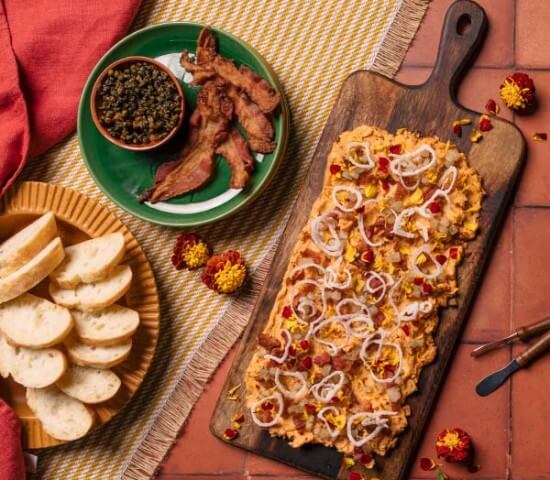 To make the maple chipotle butter; beat the butter, maple, and chipotle all together with a stand mixer or hand mixer.

To make the crispy shallots; slice the shallots thinly crosswise. Rinse the sliced shallots under cold water, then dry them off, toss through the cornstarch and fry in the preheated veg oil until crispy. Drain the cooked shallots on paper towel and set aside.

To make the candied bacon; lay out bacon in a single layer on a baking tray and bake at 350 for 20 minutes or until crispy and rendered, flipping as needed. Drain the bacon grease off the tray but leave the bacon strips on there. Sprinkle the brown sugar evenly over the bacon and return to the oven for 1-2 minutes to melt the sugar and glaze the bacon. Remove the bacon from the oven, set aside to cool. When the bacon is cooled down, move to a chopping board, and cut crosswise to make fine little bacon strips.

To make the caramelized apples or pears; peel, core and dice the fruit and toss with salt, pepper, oil, cinnamon and sugar and broil on a baking sheet under the broiler for 1-2 minutes, just until some golden-brown color develops on the edges. Remove from oven and set aside to cool.

To assemble; smear the maple chipotle butter on a wooden board. Sprinkle with the crispy shallots, candied bacon, caramelized apples or pears. Pull apart marigold flowers or rose blossoms to get flower petal confetti and sprinkle this around as well.

Possible alternate toppings: sundried olives, rum soaked raisins, gin soaked craisins, brown butter pumpkinseeds, cocoa nibs, lavender flowers, capers, crispy chickpeas. This list is not exhaustive, many other flavours would work as well. Choose what you like, be creative, have fun with it!